Destined for a King (The Bastard Brotherhood #1)
by Ashlyn Macnamara 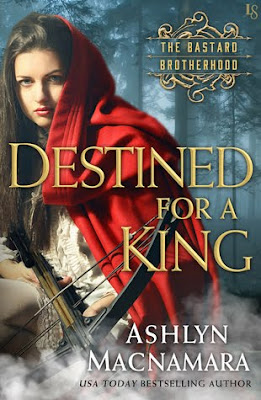 Bestselling author Ashlyn Macnamara, hailed by Jennifer McQuiston as “a born storyteller,” introduces the strapping, audacious outlaws of the Bastard Brotherhood in this enchanting tale of forbidden love between supposedly sworn enemies. Though she is intended for the king, Calista Thorne picks up a crossbow to defend her ancestral home, Blackbriar Keep, from a gang of landless knights. She even manages to sink a poison-tipped arrow into their commander, who survives long enough to conquer the Keep and claim Calista for his own. Now, with her father’s life at stake, Calista must nurse the brigand back to health, and the strangest thing happens: She finds herself fascinated by his tautly muscled body, and enthralled by his hotly whispered demands. Ever since his father’s death, the fearsome warrior they call Torch has been consumed by his quest for revenge. Taking Blackbriar Keep is the first step in that plan, and—by the three gods—it won’t be the last. But after taking one look into Calista’s smoldering gray eyes, Torch discovers a passion nobler than retribution. He will fulfill his destiny and take her from the usurper king, even in his weakened state. For with Calista’s love, no man has ever felt more powerful.

The first couple chapters of this book were captivating. I found the action, plot, and characters all very interesting and I was dying to figure out what was going to happen next. However, that excitement died throughout the novel. I felt like the beginning of this book was so exciting and promising, but it quickly lost it's charm. I didn't dislike this book, but it didn't live up to my expectations.I was really looking forward to the battle/action scenes in this book, but I felt like they were glossed over. I wanted some detailed action scenes, but that wasn't really given to me. Calista was an awesome main character! I thought she was a total badass. She proved that she was an equal to all of the men, and I was loving it. I was rooting for Calista throughout the entire book. Most of this book seemed to focus on the romance between Torch and Calista. I love romance, but I thought this book need more action, character development, and plot movement outside of the romance. The romance was hot and sexy, but it was overbearing at times. Torch became obsessed with Calista right away, and I honestly could not understand why. I felt like his feelings towards her developed way too quickly. I also cringed at some of the pet names he gave her. He called her "sweetling" and that seriously rubbed me the wrong way. However, as I said, I thought the author did a great job and making some passion-filled moments that had my kindle smoking! Overall, I thought this was a likable book. The world was enchanting and the characters were relatable. I had some issues with certain aspects of the book, but it was still a fun read as a whole. If you want a hot romance set in historical times, then I would recommend this book to you!

*This ebook was given to me in exchange for a honest review. *
Posted by MissDaemon at 8:10 AM