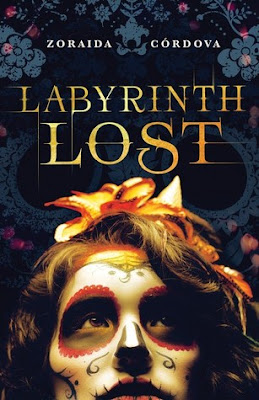 Nothing says Happy Birthday like summoning the spirits of your dead relatives.Alex is a bruja, the most powerful witch in a generation...and she hates magic. At her Deathday celebration, Alex performs a spell to rid herself of her power. But it backfires. Her whole family vanishes into thin air, leaving her alone with Nova, a brujo boy she can't trust. A boy whose intentions are as dark as the strange marks on his skin.The only way to get her family back is to travel with Nova to Los Lagos, a land in-between, as dark as Limbo and as strange as Wonderland...

1
Follow our voices, sister.
Tell us the secret of your death.
—-Resurrection Canto,
Book of Cantos
he second time I saw my dead aunt Rosaria, she was dancing.
Earlier that day, my mom had warned me, pressing a long, red fingernail on the tip of my nose, “Alejandra, don’t go downstairs when the Circle arrives.”
But I was seven and asked too many questions. Every Sunday, cars piled up in our driveway, down the street, and around the corner of our old, narrow house in Sunset Park, Brooklyn. Mom’s Circle usually brought cellophane--wrapped dishes and jars of dirt and tubs of brackish water that made the Hudson River look clean. This time, they carried something more.
When my sisters started snoring, I threw off my covers and crept down the stairs. The floorboards were uneven and creaky, but I was good at not being seen. Fuzzy, yellow streetlight shone through our attic window and followed me down every flight until I reached the basement.
A soft hum made its way through the thin walls. I remember thinking I should listen to my mom’s warning and go back upstairs. But our house had been restless all week, and Lula, Rose, and I were shoved into the attic, out of the way while the grown--ups prepared the funeral. I wanted out. I wanted to see.
The night was moonless and cold one week after the Witch’s New Year, when Aunt Rosaria died of a sickness that made her skin yellow like hundred--year--old paper and her nails turn black as coal. We tried to make her beautiful again. My sisters and I spent all day weaving good luck charms from peonies, corn husks, and string—-one loop over, under, two loops over, under. Not even the morticians, the Magos de Muerte, could fix her once--lovely face.
Aunt Rosaria was dead. I was there when we mourned her. I was there when we buried her. Then, I watched my father and two others shoulder a dirty cloth bundle into the house, and I knew I couldn’t stay in bed, no matter what my mother said.
So I opened the basement door.
Red light bathed the steep stairs. I leaned my head toward the light, toward the beating sound of drums and sharp plucks of fat, nylon guitar strings.
A soft mew followed by whiskers against my arm made my heart jump to the back of my rib cage. I bit my tongue to stop the scream. It was just my cat, Miluna. She stared at me with her white, glowing eyes and hissed a warning, as if telling me to turn back. But Aunt Rosaria was my godmother, my family, my friend. And I wanted to see her again.
“Sh!” I brushed the cat’s head back.
Miluna nudged my leg, then ran away as the singing started.
I took my first step down, into the warm, red light. Raspy voices called out to our gods, the Deos, asking for blessings beyond the veil of our worlds. Their melody pulled me step by step until I was crouched at the bottom of the landing.
They were dancing.
Brujas and brujos were dressed in mourning white, their faces painted in the aspects of the dead, white clay and black coal to trace the bones. They danced in two circles—-the outer ring going clockwise, the inner counterclockwise—hands clasped tight, voices vibrating to the pulsing drums.
And in the middle was Aunt Rosaria.
Her body jerked upward. Her black hair pooled in the air like she was suspended in water. There was still dirt on her skin. The white skirt we buried her in billowed around her slender legs. Black smoke slithered out of her open mouth. It weaved in and out of the circle—-one loop over, under, two loops over, under. It tugged Aunt Rosaria higher and higher, matching the rhythm of the canto.
Then, the black smoke perked up and changed its target. It could smell me. I tried to backpedal, but the tiles were slick, and I slid toward the circle. My head smacked the tiles. Pain splintered my skull, and a broken scream lodged in my throat.
The music stopped. Heavy, tired breaths filled the silence of the pulsing red dark. The enchantment was broken. Aunt Rosaria’s reanimated corpse turned to me. Her body purged black smoke, lowering her back to the ground. Her ankles cracked where the bone was brittle, but still she took a step. Her dead eyes gaped at me. Her wrinkled mouth growled my name: Alejandra.
She took another step. Her ankle turned and broke at the joint, sending her flying forward. She landed on top of me. The rot of her skin filled my nose, and grave dirt fell into my eyes.
Tongues clucked against crooked teeth. The voices of the circle hissed, “What’s the girl doing out of bed?”
There was the scent of extinguished candles and melting wax. Decay and perfume oil smothered me until they pulled the body away.
My mother jerked me up by the ear, pulling me up two flights of stairs until I was back in my bed, the scream stuck in my throat like a stone.
“Never,” she said. “You hear me, Alejandra? Never break a Circle.”
I lay still. So still that after a while, she brushed my hair, thinking I had fallen asleep.
I wasn’t. How could I ever sleep again? Blood and rot and smoke and whispers filled my head.
“One day you’ll learn,” she whispered.


Then she went back down the street--lit stairs, down into the warm red light and to Aunt Rosaria’s body. My mother clapped her hands, drums beat, strings plucked, and she said, “Again.”

I was really anticipating this book. The cover and the description of this book had me hyping up the book in my mind. However, this book fell flat for me. I don't mean to say that I didn't enjoy this book, because I did enjoy it, but I didn't love it as much as I was expecting to. Even though I didn't completely love this book, there were still a lot of things I enjoyed about this book. I thought the world the author created was so interesting and unique. The magic and the creative monsters were all so imaginative. I loved exploring the world right alongside the characters. I truly have not read a book with a world quite like this one, and I applaud the author for creating such a captivating world. I think the main issue I had with this book was with the characters. I had a hard time warming up to the main character, Alex. Alex came off as an annoying brat who didn't appreciate anything or anyone. I eventually warmed up to her, but she isn't one of my favorite main characters ever. I would have liked to see more character development for her. I thought the secondary characters were more interesting than she ever was, especially Nova. Nova was my favorite character, hands down! I loved the fact that this book had an F/F romance. I personally haven't read any YA book with a F/F romance, so I found the romance in this book to be really refreshing. The romance was cute and it had a lot of sweet moments. The only issue I had with the romance was that I felt like it was rushed. I feel like the romance was underdeveloped, so it was hard for me to completely believe the romance. I thought the plot was interesting in the beginning of the book, but I started to loose interest near the middle of the book. However, I thought the pace picked up near the end of the book and it left me wanting the next book. I am now very interested to see what will happen next! Overall, I found Labyrinth Lost to be an interesting book with exquisite world building. Even though I didn't LOVE this book, I still enjoyed it. I would recommend this book to anyone who likes Alice in Wonderland and other stories like it.

Zoraida Córdova was born in Ecuador and raised in Queens, New York. She is the author of the Vicious Deep trilogy, the On the Verge series, and the Brooklyn Brujas series. She loves black coffee, snark, and still believes in magic. Send her a tweet @Zlikeinzorro or visit her at zoraidacordova.com.

Runs September 6-September 19 (US & Canada only)

a Rafflecopter giveaway
Posted by MissDaemon at 8:15 AM