The Ferryman Institute by Colin Gigl 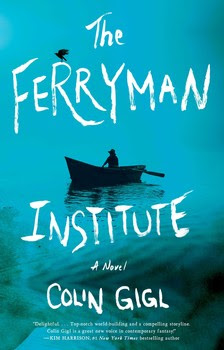 In this stunning, fantastical debut novel from a bold new voice in the bestselling traditions of Christopher Moore and Jasper Fforde, a ferryman for the dead finds his existence unraveling after making either the best decision or the biggest mistake of his immortal life.

Ferryman Charlie Dawson saves dead people—somebody has to convince them to move on to the afterlife, after all. Having never failed a single assignment, he's acquired a reputation for success that’s as legendary as it is unwanted. It turns out that serving as a Ferryman is causing Charlie to slowly lose his mind.


Deemed too valuable by the Ferryman Institute to be let go and too stubborn to just give up in his own right, Charlie’s pretty much abandoned all hope of escaping his grim existence. Or he had, anyway, until he saved Alice Spiegel. To be fair, Charlie never planned on stopping Alice from taking her own life—that sort of thing is strictly forbidden by the Institute—but he never planned on the President secretly giving him the choice to, either. Charlie’s not quite sure what to make of it, but Alice is alive, and it’s the first time he’s felt right in more than two hundred years.


When word of the incident reaches Inspector Javrouche, the Ferryman Institute's resident internal affairs liaison, Charlie finds he's in a world of trouble. But Charlie’s not about to lose the only living, breathing person he’s ever saved without a fight. He’s ready to protect her from Javrouche and save Alice from herself, and he’s willing to put the entire continued existence of mankind at risk to do it.

Written in the same vein as bestselling modern classics such asThe Eyre Affair by Jasper Fforde and A Dirty Job by Christopher Moore, The Ferryman Institute is a thrilling supernatural adventure packed with wit and humor.

"Be a Ferryman or save the girl. Your choice."

Charlie has been given the gift of immortality. His job is to be a Ferryman. He does his job well. In over two and a half centuries he has not had an incomplete job. So what does his job entail? Charlie is responsible for assisting people in their next journey after they die. He doesn't know what happens to them after he opens the door to their future. He just needs to convince them to crossover. Sadly, Charlie is tired of witnessing so much death. He has asked for a transfer numerous times but he's always denied. The reason being that Charlie is the best Ferryman they have.

"I am tired of all the death."

To his surprise, Charlie is given a new assignment which rumor has it comes from the President of the Institute. His next job involves a young woman, Alice Spiegel, who's about to commit suicide. To his surprise, he has a choice of saving her life. Of course, Charlie doesn't think twice and with this action, he sealed his fate. Soon they are both running from Inspector Javrouche who wants nothing more that to hurt Charlie and what better way to do it than to kill Alice.

The Ferryman Institute was a refreshing fantasy with witty characters and a lot of action.

Charlie was a really nice guy who was just tired of death. He had witnessed too many deaths and he didn't want to do it any longer.  I believed that when he saved Alice he really saved himself. Charlie's character was likable. I enjoyed his humor but also his desire to help the dead. He didn't want them to become lost souls.

Alice Spiegel had a terrible year. Her parents divorced, her mother died from cancer, her boyfriend Marc left her and she has no real job. She has sunken into a horrible depression and she thought the only way out was to off herself. She was in so much pain making it natural for me to feel her agony and devastation. I'm glad Charlie put a stop to her plan and I loved how he was able to make her smile and feel good about herself again. The best part was when she realizes she didn't want to die any longer.

"Come with me or stay here. It's your call."

Overall, I like the idea of the Ferryman Institute. It would be nice if someone is there waiting to help you make the right decision.

"We are comfort. We are hope."