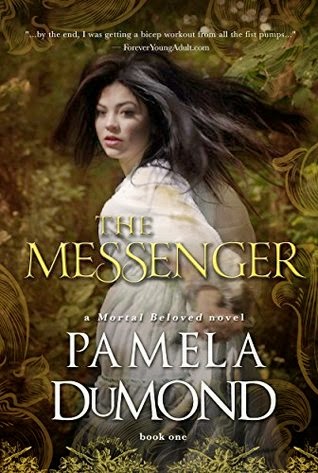 The best way for be to describe how I felt after reading this book would be that I felt let down.

The description of the book sounded so interesting, because I love the idea of time travel and I love romance! At first, I was really enjoying the book. Well, I enjoyed the prologue. It was interesting, had action, and it had mystery. However, I was pretty bored after the prologue. I couldn't really connect with the main character, Madeline. Despite that, I decided to keep reading, because I really wanted to get to the time travel portion of the book.

I loved the time travel in this book. It made the book exciting at those points, and I really liked the "Messenger" concept of the book. I won't say much about the "Messenger", because I don't want to give away any spoilers. However, I wish there was more development of the history of the "Messenger". The world building was awesome, but I wanted more of it. I felt like there wasn't enough development of a lot of things in this book. For example, I felt like the romance should have been developed more. The plot was okay. It dragged at some points and it was high paced at other points. It was never very constant, which was disappointing.

However, my biggest complaint about this book is Madeline. I could not stand her. She did so many dumb things through out the book. I constantly was either rolling my eyes at her or screaming at my book because she was so dumb. Madeline really made the book unenjoyable. I wanted to tell her to stop talking, because she was just so annoying. She was in the 1600s and would say words like "whatevs"?

Overall, the book had great potential. I think I would have liked the book a lot more if Madeline wasn't such a horrible main character. Everything else had potential to be really interesting. I will not be reading the next book, because I hated Madeline so much. This book would be great if was rewritten so that Madeline was less annoying, the plot was better paced, and more things were developed through out the story.

Posted by MissDaemon at 8:14 PM