Haddie "City" Montgomery wants to forget for one night that her sister is no longer in this world. After Colton and Rylee's wedding, she wants to loose herself and what better way to do it than to have sex. When she sees Beckett she decides it is time to seduce him. No strings attached.  Just one night of passion with him is all she wants.

"My onetime lap around the track with Becks is over."

Beckett "Country" Daniels can't seem to stay away from Haddie. From the moment he met her, he knew he was in trouble. After one night together, he knows those strings are more like chains and he wants to get to know her better. Haddie doesn't make it easy. She is hiding things from him but Beckett is nothing but determined to break those walls she has created around her heart.

"That's where you're wrong, City. Everyone deserves to be rescued at some point."

Let's just say that I love Beckett. He was sweet, he was determined to make Haddie realize that he wanted more from her and that he was going to be there for her regardless.
Haddie drove me a little insane at times. She was always waiting for the worst to happen but in a way, she was not living life. A couple of times I wanted to scream at her to open her eyes before she lost Beckett.

“time is precious, waste it wisely.”

Be prepared there are very sad moments and also very tender ones.
I love that we are provided with both main characters POV. Being in Beckett's head was a treat.
The banter between Colton and Beckett was hilarious but also the one with Walker.
In a nutshell, I was very happy with the way the story played.

"Time is precious, waste it wisely."

This is the first book I've read from K. Bromberg and I'm pretty sure it will be my last.  I've had the other books in the Driven series on my TBR for awhile and jumped at the chance to read this when I saw it could be read as a standalone.  It may have just been my mood or it could have been the author's style of writing, but something just didn't click for me with this one.  I liked the premise, but never found myself caught up in the story or the characters.

Haddie lost her sister a year ago and she's had a hard time letting go.  She throws herself at Beckett for a 'no strings' night of forgetting.  Letting someone get close or having a relationship is just not an option for her.  She sees her brother-in-law's struggle and won't put someone through that. Becks has had his eye on Haddie for awhile though, so he has other plans in mind.  It becomes a back and forth struggle that becomes really repetitive.  He chases, she submits, and then ultimately runs.

The biggest thing that was missing was dialogue. The POV switches between Haddie and Becks and the majority of the story is their inner thoughts.  Her freaking out in her own head and him trying to figure out how to get her to open up.  There was a lot of thinking and not enough action, which left me bored and counting down the pages.

The best part of the book was definitely Becks, by far.  He was the type of guy you would want to spend forever with.  And his bromance with Colton was cute.

After the death of her sister, Haddie has sworn off relationships.  Wanting to forget about her sister for the night, she throws herself at Beckett with “no strings attached”.

Beckett doesn’t seem to agree with the “no strings attached”.  He instantly falls for Haddie and wants more than a couple nights together.

“Run all you want, Haddie,” he murmers, his deep cadence a strong sound against the white noise around us, “but you’re going to find yourself all tangled up in those dangling ends you refuse to tie to something… Who’s going to rescue you then?”

Eventually Haddie has to face reality.  Will she let her fear of a relationship stop her from true love?

“Haddie, you can’t close yourself off forever.  A life without passion and love is like slowly freezing to death.”

Haddie was a frustrating character to read.  She was so swamped with her fears (which in reality were understandable), that she almost missed an amazing man like Becks. 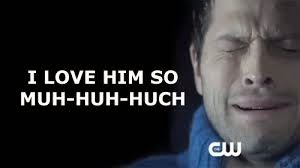 Overall it was a decent story.  There were parts that made me cry like a baby and times when I wanted to scream and throw my iPad.  It really did pull all the emotions out of me.

*Complimentary copy provided by the publisher in exchange for an honest review*
Posted by MrsLeif at 4:56 PM