Bad girls have all the fun… Trying to fit in with expectations has left Diane Milstrom lonely and dateless for yet another New Year’s Eve. After being forced to witness her ex proposing to the woman he dumped her for, she has one too many drinks and makes an uncharacteristically impulsive decision: she’s not going to be good anymore. It’s gotten her nothing but heartache, and besides, everyone knows bad girls have all the fun. Sam Everly enjoys the lifestyle his family’s wealth provides, but he hates the trappings of society that come with it. If he has to attend one more family function full of bored socialites, he just might lose it. Diane Milstrom, his eldest brother’s ex-girlfriend, is the worst of the lot…or so he always thought. But when he overhears her making a Bad Girl To-Do list, he starts to wonder if maybe there’s more to her than meets the eye. Curiosity gets the better of him, and he volunteers to help her with some of the more…ahem, explicit items on her list. When Sam points out that being naughty with her ex’s brother is something only a bad girl would do, Diane can’t help but see his point. Besides, she could do worse than a little between-the-sheets action with a sexy guy who makes her heart beat in ways his brother never could. It’s only supposed to be a fling, a way to help her stretch her bad girl wings. But the more items they cross off her list, the higher the stakes become. Because if they aren’t careful, she just might fall in love…and that’s one thing a bad girl should never do.

Excerpt
Giving into impulse, Sam turned back to Diane. She sighed and set her phone, which was covered in a pink rhinestone-studded case, onto the table. Then she leaned over it in a way that made her look sad and lost. The movement gave him a clear view of the generous cleavage spilling out over the top of her slinky golden gown.
To his chagrin, he felt himself growing hard again.
Don’t be a dick. Just walk away.
She’d clearly had too much to drink. Doing anything other than leaving her alone would be stupid and wrong. Yet even as he thought that, he found his feet moving directly toward her.
Before he could even process what he was doing, he found himself taking the seat Diane’s friend had just vacated.
Her eyes widened as she looked over at him and then she groaned. “Oh, no.”
He eyed her in confusion. Had he done something to her he didn’t remember?
“What?”
Diane’s lips puckered into an enticing pout. “Nothing personal, but the last thing I want to see right now is another Everly.”
“Ouch.” He mock scowled to hide the twinge of hurt her words had sparked. “We’re not all alike, you know.”
She sighed and leaned back in her chair. “I know.”
He hesitated for a moment, at a loss for words. Something in her expression made him want to apologize for Andrew’s carelessness. He opened his mouth to do just that, when she crossed her arms over her waist, unintentionally pushing the swell of her breasts together and making his brain momentarily short circuit.
His cock twitched in his pants, and when he spoke, his words weren’t the comfort he’d thought to give.
“I overheard you talking about your list.”
Her breath hitched. “You what?”
“Your list.” He’d already mentioned it. No going back now. “I heard you talking about it.”
Diane locked gazes with him, her light green eyes dilated in a way that made him think of sex. “I don’t know what you’re talking about.”
Oh, she wanted to play that game, did she? If there was anything he was good at, it was games.
Grinning, he plucked her phone off the table.
“What are you doing?”
She lunged for it, but he raised his hand in the air, and her palms landed on his chest instead. She sucked in another breath, her chest heaving in a way that made it hard to take his eyes from her breasts, and then slowly sat back.
Seizing the moment, he swiped through her phone and found the list. Some demon inside of him prompted him to recite it aloud. “Oral sex in public. Spanking. Bondage.”
Well, damn. He didn’t know why he’d felt the need to tease her, but with every word he read, his humor evaporated. In its place, rose sharp, dark need.
He hesitated on the last item she’d listed. “Play slave to his master.”
When his gaze rose to hers, two bright spots of color decorated her cheeks. She could’ve slapped him, or cursed him out and stalked away. Both of those would have been well within her right.
Instead, she lifted her chin haughtily and said, “So you’ve read my Bad Girl To-Do list. So what?”
Even as admiration for her gumption coursed through him, his insides twisted with a melding of emotions: chagrin, lust, confusion, all rolled into one tight ball in his gut.
So what? So she’d just typed his every secret desire into her pink-studded cell phone, that was what.
Play slave to his master.
How many times had he fantasized about getting a woman to do just that? The problem was, given his usual laidback demeanor, any time he tried to go that route in the bedroom he ended up surprising the hell out of his partner. Was it so hard to believe, given his carefree nature, that he could be an Alpha in the bedroom?
Apparently so.
Diane didn’t know it, but her bad girl list had just awakened his deepest fantasies, and now she was the star of the play running in his mind.

Also in the Everly Brothers series...

Wild girls get what they want…
After moving to New York City, Hailey Thompson lands a job as the assistant to her older brother’s best friend - and her childhood crush - Andrew Everly. Seeing Andrew again both thrills and terrifies her. The lighthearted boy she remembers has grown into an impossibly handsome man, but he’s also become a cold and ruthless businessman. When Andrew agrees to hire Hailey as a favor to his childhood friend, he still thinks of her as the fresh-faced girl that he knew growing up. On the contrary, she’s all woman. Temptation in a short skirt. As alluring as she is though, the little beauty is far too flighty for a man like him…not to mention that he’s her boss. As Andrew secretly struggles with his self-control, Hailey does everything in her power to crack his rigid façade. After being forced to spend a weekend away together on business, Andrew’s rigorously sculpted mask of discipline begins to slip, and Hailey gladly takes advantage of the opportunity to educate him in the ways of seduction. He can claim all he wants that he likes his women elegant and controlled, but Hailey knows a dirty little secret…when it comes to matters of the heart, wild girls rule.

Synopsis:
Good girls don’t do one-night stands…
If there’s one thing Lyssa Rivera knows, it’s that good girls don’t do one-night stands. But it only takes a few hours in the company of sexy businessman, James Everly, to change her mind. All she wants is a night of sin with the man who’s admittedly way out of her league. Then she can go back to being painfully, boringly good. James Everly doesn’t do relationships, not after the horrible example set by his parents. When he meets a luscious, irresistible woman at his favorite bar, he’s more than ready to show her a night of ecstasy, but that’s all it could ever be. He certainly never plans on seeing her again. Yet when he shows up at his meeting the next morning to woo a venture capitalist, he’s shocked to find his competition is the very woman whose bed he just left. James knows he should stay away. He’s no good at long term, and that’s what a woman like Lyssa deserves. But as the two vie for the investor’s attention, he finds himself struggling to choose between the family business and the woman whose touch makes him burn with desire.

Rosalie Lario is the author of the contemporary romance series, THE EVERLY BROTHERS, as well as the paranormal romance series, DEMONS OF INFERNUM and THE FALLEN WARRIORS. Rosalie double majored in Anthropology and Classics as an undergraduate student, and briefly considered becoming an archaeologist before realizing they don't actually live the life of Indiana Jones. So what was a classical geek armed with a lot of useless knowledge to do? Become a lawyer, of course!
After attending law school in Florida, she practiced real estate law for several years before finally admitting to herself that negotiating contracts wasn't nearly as fun as dreaming up stories. When not writing, you can find her on a boat somewhere along South Florida's waterways, chasing down a rainbow or pretending to be a pirate. 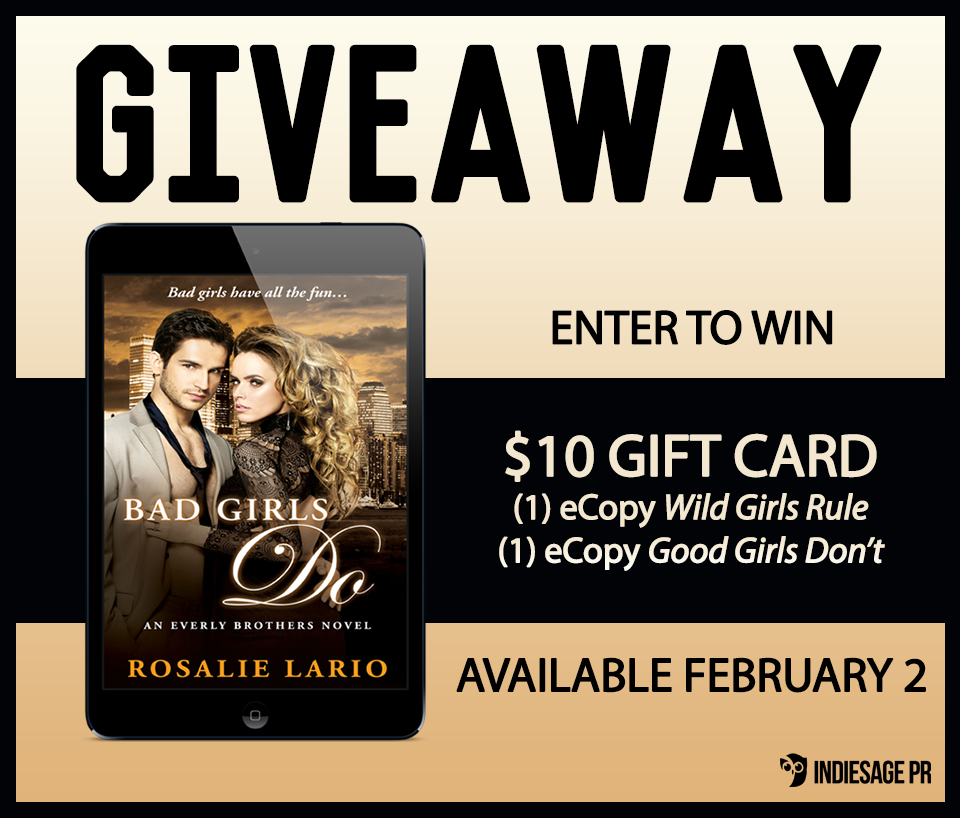