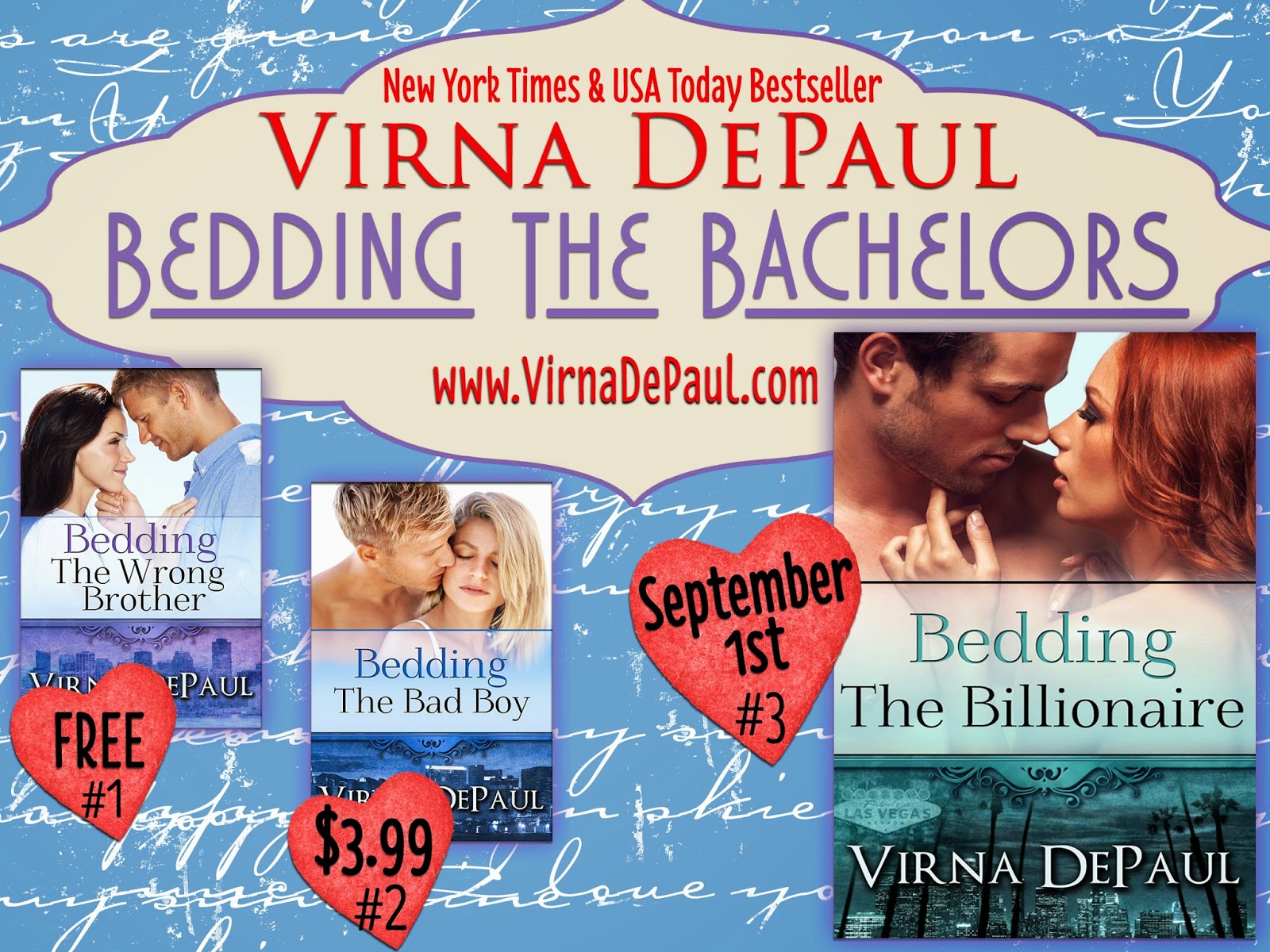 New York Times and USA Today Bestseller Author Virna DePaul brings her readers the love story they’ve been waiting for! The third book in the brilliant Bedding the Bachelors series, BEDDING THE BILLIONAIRE is out now!  Our favorite characters, Lucy and Jamie are finally getting their romance and you do not want to miss a second of it! 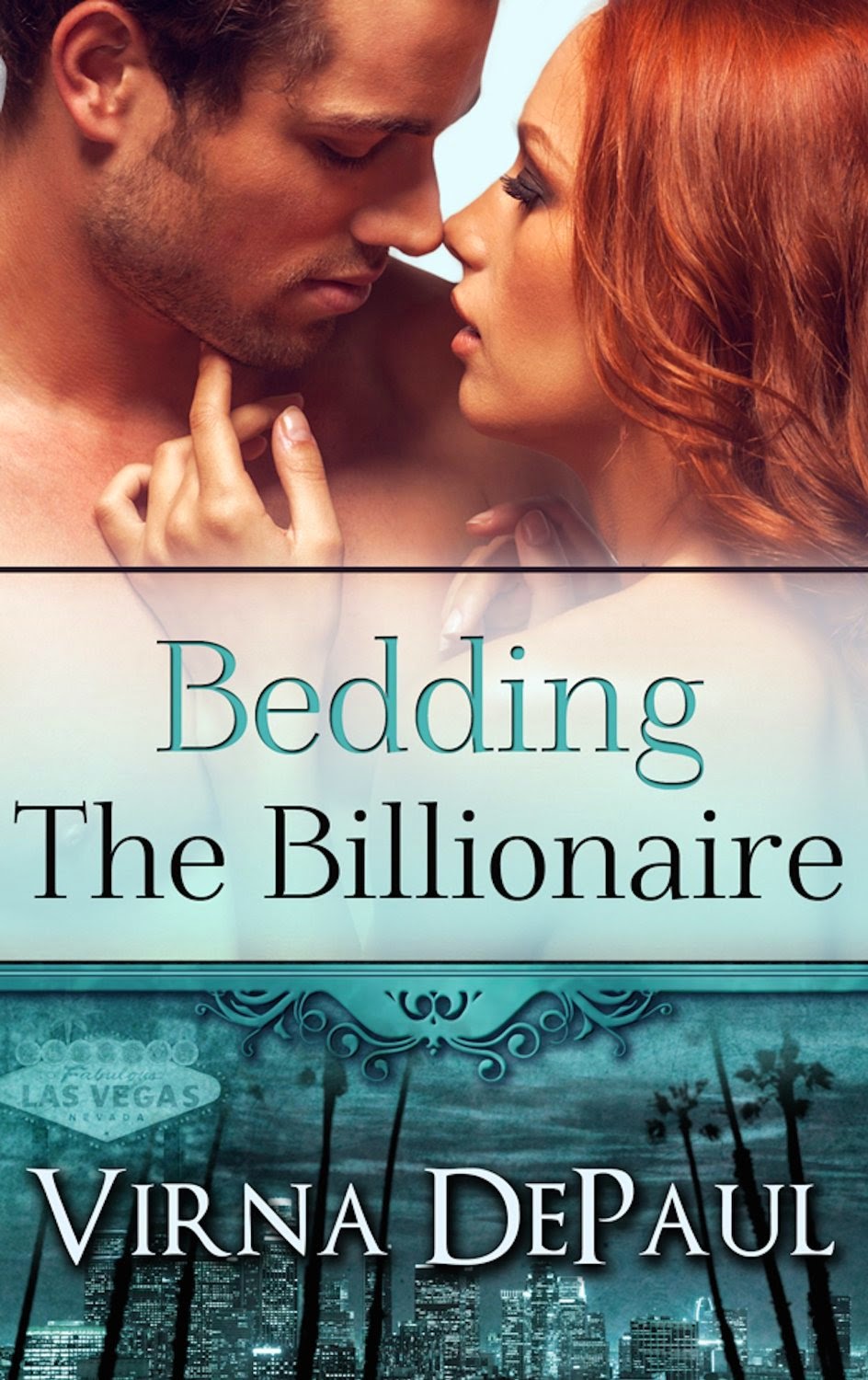 Free-spirited Lucy Conrad enjoys her friends but keeps others at a distance, especially her affluent and judgmental family…and the billionaire she once dated, Jamie Whitcomb. Despite their explosive chemistry, experience has proven she’ll never fit into his world.

Charismatic Jamie enjoys work, women, and wealth. When duty demands he take over running the family business, he jumps in full-throttle; his only regret is Lucy’s refusal to take the ride with him.

Then tragedy strikes and Lucy realizes that in order to gain custody of her orphaned niece, she must prove she can fit back into the high-society world she once rejected. The solution? Accept Jamie’s make-believe marriage proposal, and be seen as the type of mother her niece deserves. Respectable. Controlled. Willing to play the game.

With her faux-fiancé by her side, Lucy exchanges dirty martinis and leather for champagne and silk. But when the passion between Lucy and Jamie only grows greater, they have to make a choice: back away from each other and not get hurt…or risk everything for the kind of love money can’t buy.

“So, about why you came…”
“I came to say a goodbye, of sorts.”
Her heart stuttered, but hopefully she managed to keep her face blank. “Goodbye?”
“That’s right. I’m not coming back next semester.”
“You’ve taken another teaching job?”
“No,” he said, slipping his hands in his pockets. “Teaching has been wonderful, but I always planned to return to Whitcomb Enterprises in Los Angeles. My father will be retiring soon. Plus, the company’s expanding into airplane parts manufacturing plants and my environmental science expertise is going to be critical in that expansion.”
“I see,” she said, looking down at her hands, folded on her desk. “So, when are you leaving?”
“I leave tomorrow in order to start the ball rolling, but I won’t officially be in the swing of things for a few weeks.”
He left tomorrow.
She hadn’t seen him much since they’d broken up. Only here and there. And she’d been so angry before. It had only been a few weeks since they’d been able to be civil to one another again. Now he’d be gone from her life. Forever?
She was more shaken by the news than she wanted to admit.
“Are you okay?” he asked.
She swallowed, forcing a shrug. “Of course. I wish you well, Jamie.”
“I may be leaving the university, but we’ve still got Vegas.”
“Of course.”
“I’m attending a bachelor party while I’m there—one of my college friends is marrying my sister—and then I’ll be at the wedding.”
“That’s right. Brianne. And Eric?”
His jaw clenched. “That’s right.”
“So the wedding is in L.A.?”
“Coronado Island.”
The well-to-do place where he grew up. Lucy had been there once. It was a beautiful beach resort town that managed to seem casual even as it reeked of old money.
“Yes, well…I’m sure it’ll be a grand affair.” She rose from her seated position behind the desk, and to prove to him and to herself how over him she was, she came around to where he was and reached out to give him a hug. “See you in Vegas.”
He wrapped his arms around her waist.
His shoulders were as strong and broad and taut as she remembered them. His scent as woodsy. His breath as soft on her neck as he held her tight, returning the embrace. Tingles shot through her stomach. God, what this man could do to her. Sexual chemistry had never been their problem.
A little overwhelmed by being in bodily contact with a man her body still seemed to desire, she pulled back, intent on ending the hug. But when she tried to pull away, Jamie kept his arms around her waist.
“Do you need something else?” she asked, now eye-to-eye with him.
“Yes.”
For a moment, time hung suspended, and it seemed as though Lucy could see every fleck of gold in Jamie’s eyes, could feel every pound of his heartbeat, could breathe in the essence of him…and then he cupped her face and kissed her, even as he wound the hair at the sides of her face up in his fingers and tugged. Lucy felt herself melt into him and a moan escaped her lips. As they parted of their own free will, he slipped his tongue inside her mouth and sought hers out.
God, it was so good to kiss him. To have him touch her again. Lucy could hardly breathe. She was dizzy and she felt like she might very well black out.
She opened her eyes and he was staring into hers with an intense smoldering look that made her want to take him right there on the desk. Instead, she forced herself to take a step back.
“Bye, Luce. Take care of yourself, okay?”


“You, too,” she said simply. Because what else was there to say? 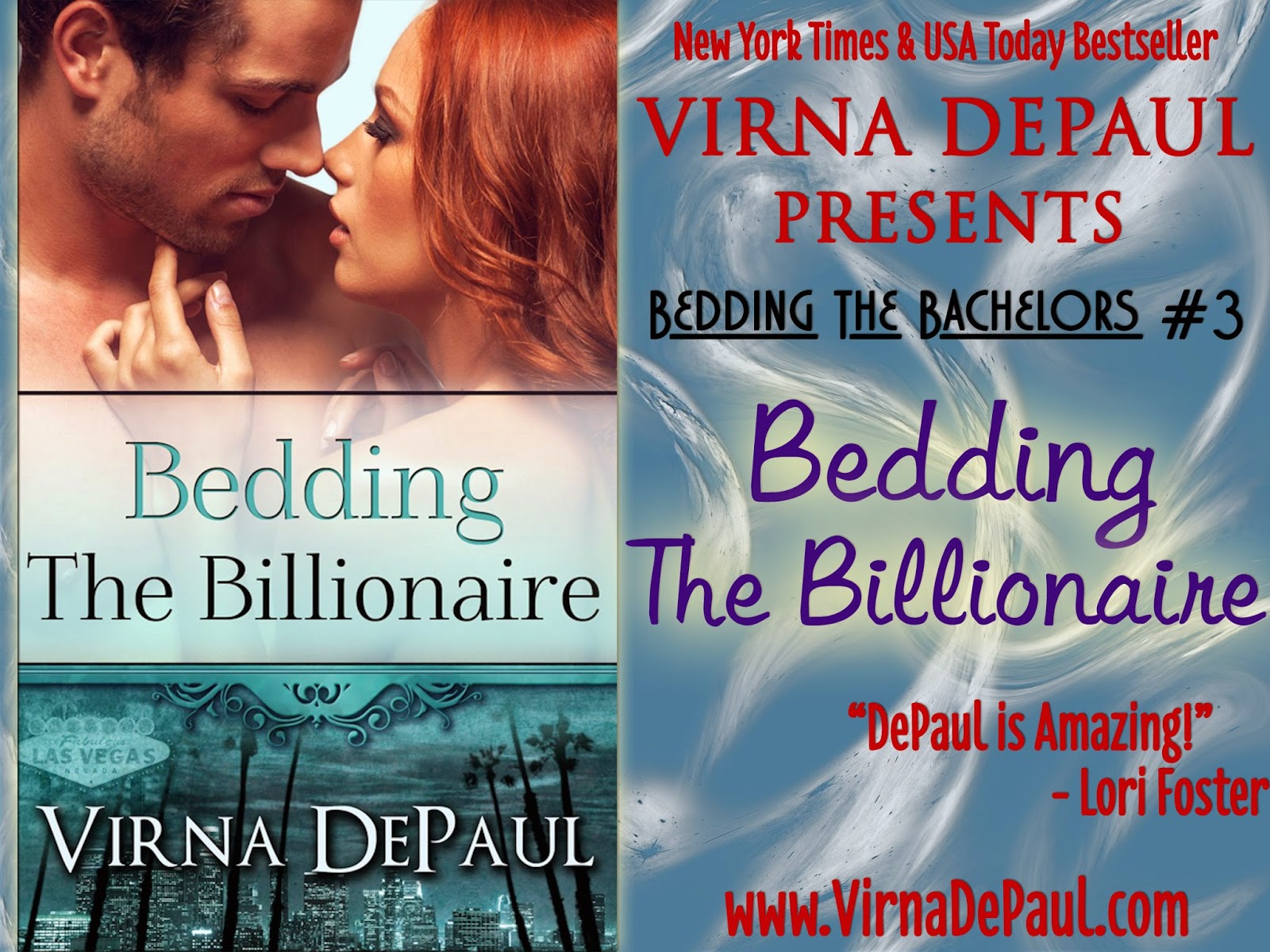 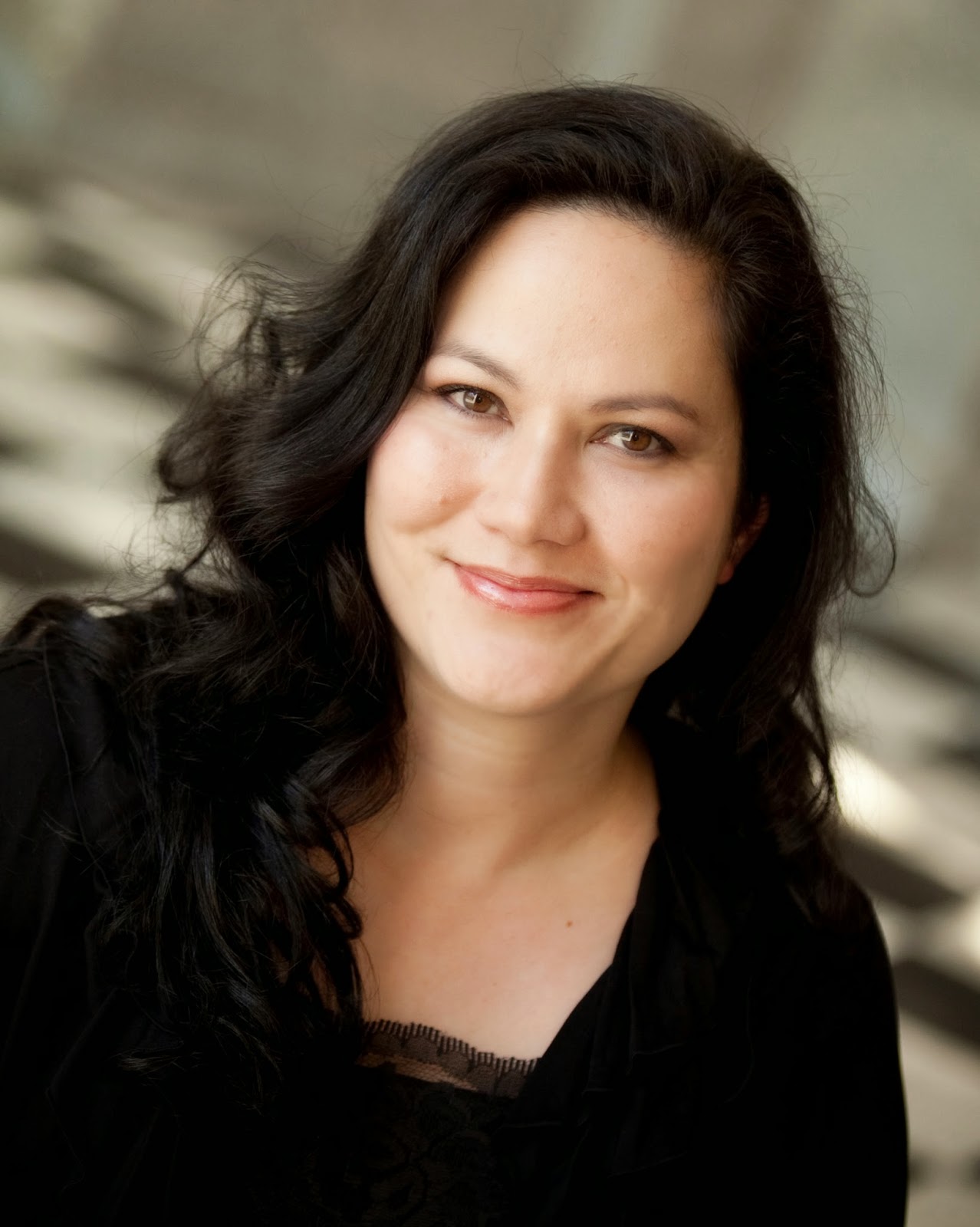 Bedding The Wrong Brother is a #1 Bestselling Contemporary Romance and USA Today Bestseller, and is followed by Bedding The Bad Boy. Her PNR series with Random House includes Turned and Awakened. She loves to hear from readers at  www.virnadepaul.com 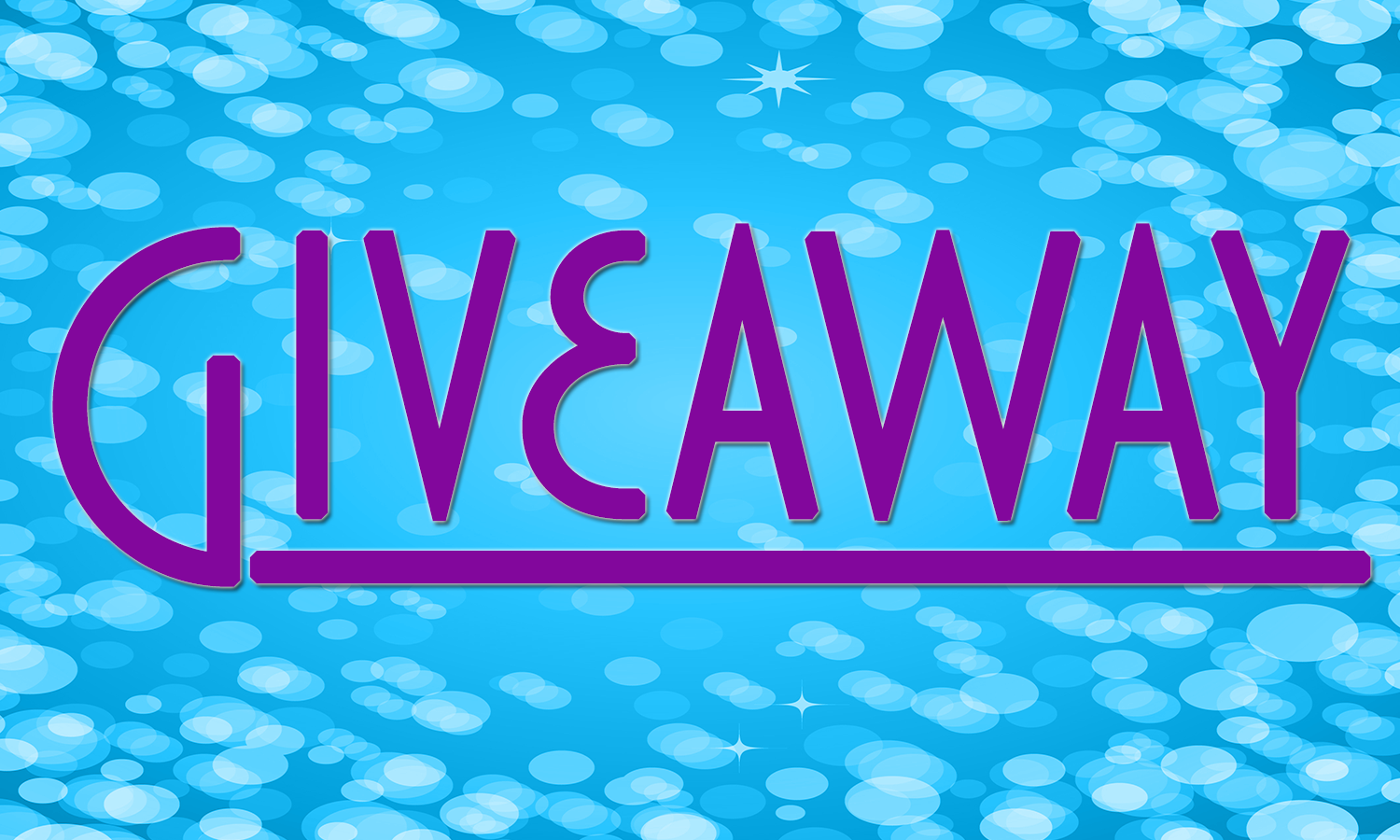 Virna is giving away three rocking prizes!
One $10 Gift Card
One Virna DePaul Bag full of books and swag from
Authors After Dark 2014
The first two Bedding the Bachelors books in Audio 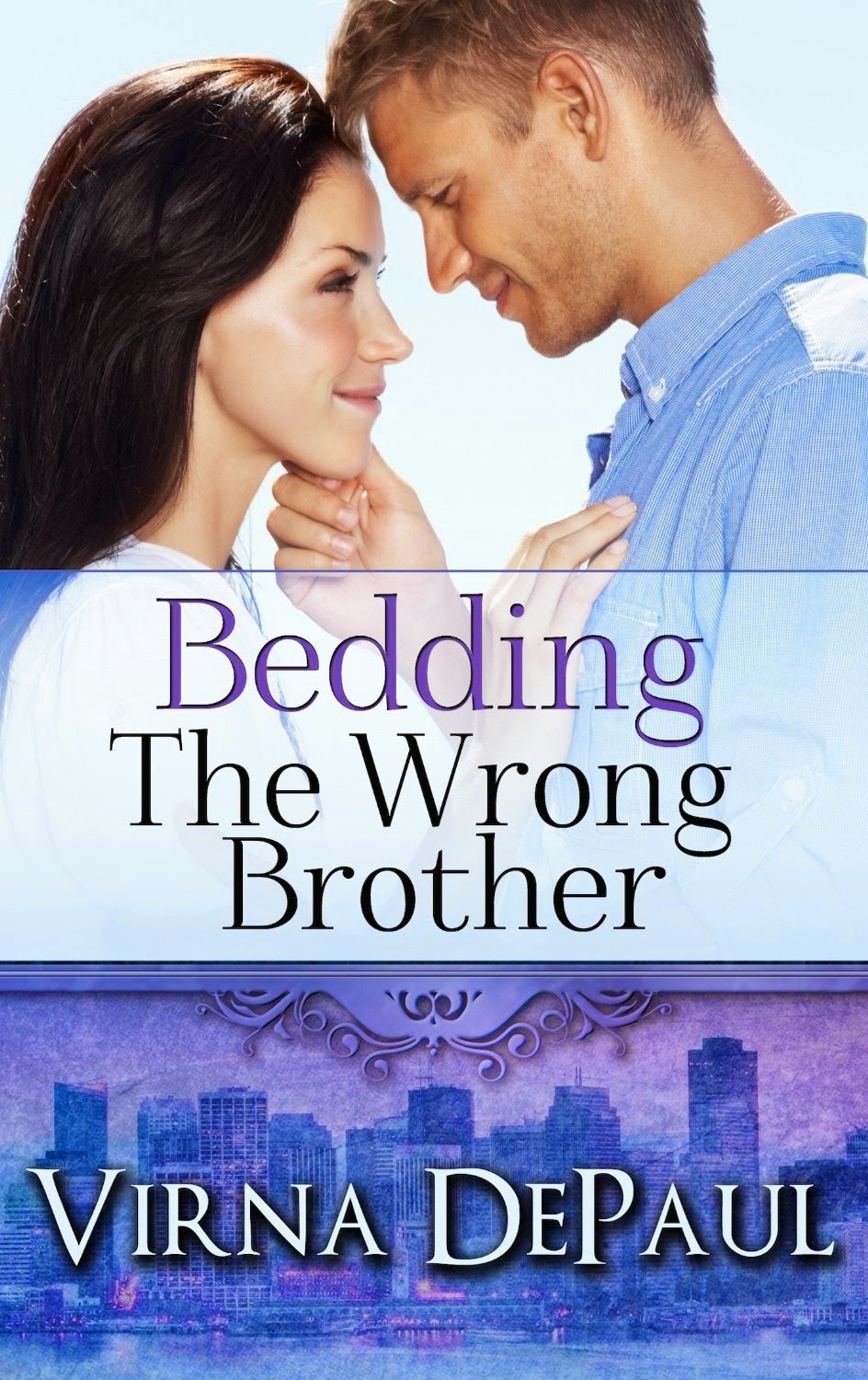 Determined to find her inner sex drive, she enlists her childhood friend Max Dalton, to tutor her after hours.

Instead, she ends up in the wrong bed and gets a message in passion from Max’s twin brother, Rhys Dalton, a man Melina’s always secretly wanted by never thought she could have. 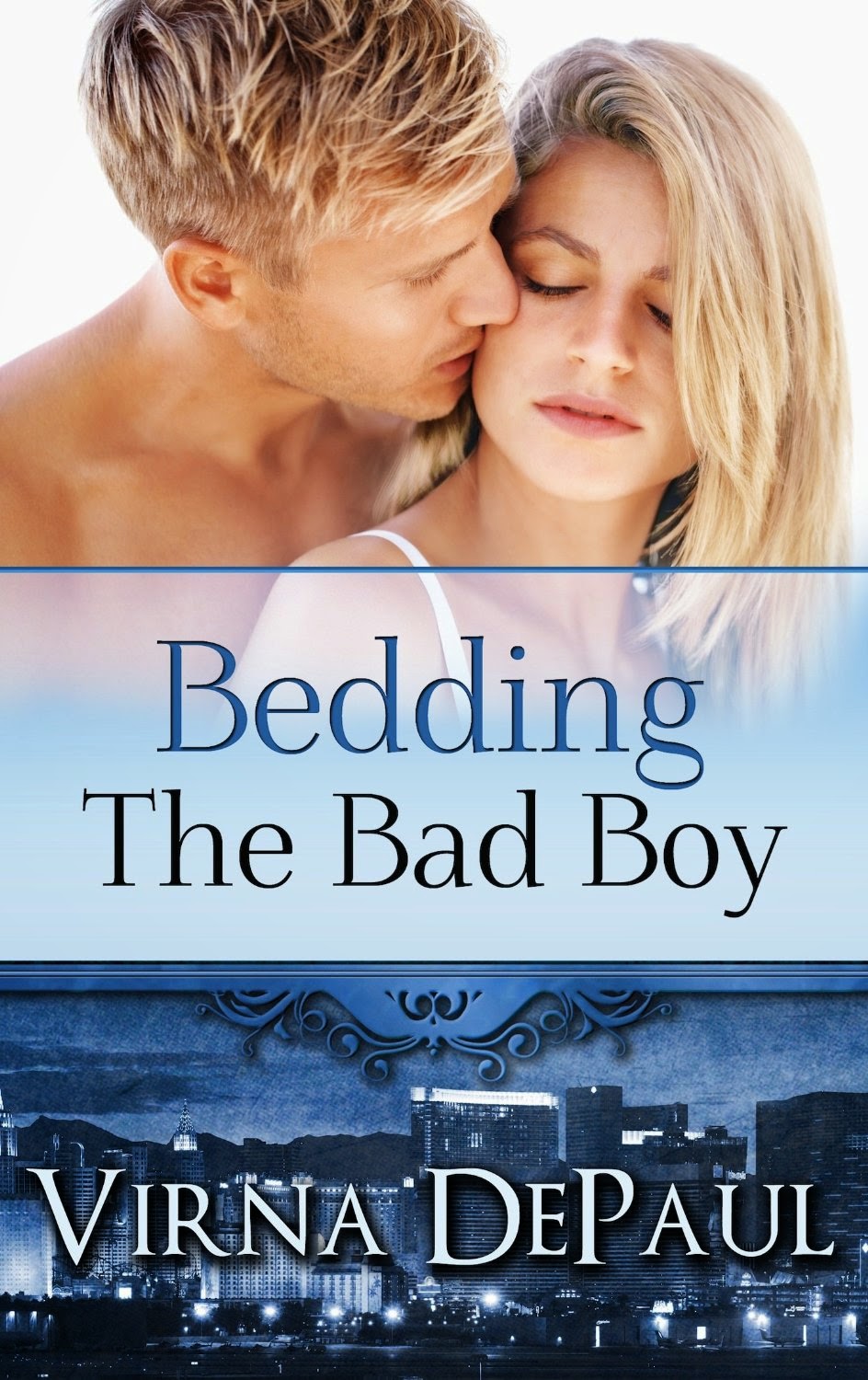 This bad boy is ready to work some magic…

Identical twin and Las Vegas performer Max Dalton has always been the number one bad boy in his family, and he’s appreciated the women and fame that comes along with his reputation.

Grace Sinclair is on a mission when she comes to Vegas, one that involves asking Max, her best friend’s brother-in-law, to give her the pleasure no man’s ever been able to. She suspects Max has more layers than he lets people see, but she’s determined to keep her heart safe even as she offers him her body.

What neither of them plan on is love—or the triangle the media stirs up with Max’s blonde bombshell actress friend.

Will Grace see beyond Max’s bad boy façade long enough to trust him with her heart? And will Max figure out what he really wants before he loses the one woman who makes him believe in love again?