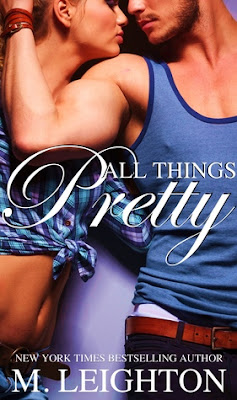 Pretending to be something they’re not, afraid to trust anyone completely, destined to tear each other apart– this is the story of unlikely love and unbearable consequences. Sig Locke is a cop. He was raised by a cop and all his brothers are cops. He bleeds blue, believes in right and wrong, and sees in black and white, never in shades of gray. But that was before he met Tommi. Tommi, with her long legs and bright green eyes, she captured Sig’s interest from the moment he saw her. Even after he discovered who she was–the girlfriend of a drug dealer, the beauty behind a criminal–he still found her utterly irresistible. What Sig doesn’t know, however, is that she has a secret even a cop can’t uncover. Tommi Lawrence hasn’t had an easy life, and it only got more complicated the day she met Sig. She learned long ago that she can’t trust anyone. Her gut tells her that Sig is no exception, her heart tells her that he is. But that was before she found out his real identity. Can love be forged in a fire of lies? Or will the truth destroy them both?

Her lips are still curved when she turns her attention back to me. Something about the moment hits me like a punch to the gut. I think for a second that I could stand here and stare at her, just enjoy her smile and her happiness for hours. Days, maybe. But I can’t. We can’t. So, instead, I brush a clump of mud from the end of her nose. “Have fun?” “I did. Thank you. This was so good for him.” “And you.” “And me,” she concedes. “You can be the real you around me anytime. I won’t tell a soul.” “So you prefer this?” “Oh, hell yeah! I don’t need glamorous. Or proper.” “I’m not proper.” “You forget that I heard your…expressiveness that day on the side of the road. And it didn’t consist of ‘darn’ or ‘golly gee’. But I haven’t heard anything like that come out of your mouth since then.” “Ladies aren’t supposed to talk that way, according to Lance.” “I don’t want a lady. I want a woman. One who knows her own mind. One who wears what she’s comfortable in, one who says what she’s thinking.” I take a step closer. I can’t help myself. Her scent draws me in. Even covered in mud, she smells like sexy sunshine. “I want the woman who kisses like she’s on fire and makes me feel like I’m the only one who can put her out.” “Sig,” she begins. I break in to cut her off. I know her objections. And I know how much I don’t want to hear them. “I’m just being honest. I’m not even touching you.” Her eyes are glued to mine, a damn near irresistible gravity pulling us together. “It’s not like you can anyway. I mean, we’re in public. With my little brother. What could you possibly touch?” I reach down and smear my hand in mud. With her eyes locked on mine, I reach between us and flatten my palm on her chest, right over her heart. “This. I’d touch this.”

New York Times and USA Today Bestselling Author, M. Leighton, is a native of Ohio. She relocated to the warmer climates of the South, where she can be near the water all summer and miss the snow all winter. Possessed of an overactive imagination from early in her childhood, M. Leighton finally found an acceptable outlet for her fantastical visions: literary fiction. Having written over a dozen novels, these days M. Leighton enjoys letting her mind wander to more romantic settings with sexy Southern guys, much like the one she married and the ones you'll find in her latest books. When her thoughts aren't roaming in that direction, she'll be riding horses, swimming in ponds and experiencing life on a ranch, all without leaving the cozy comfort of her office.

A note from M. Leighton: I love coffee and chocolate, even more so when they are combined. I'm convinced that one day they could be the basis for world peace. I also love the color red and am seriously considering dying my hair.

Posted by Anonymous at 3:39 PM