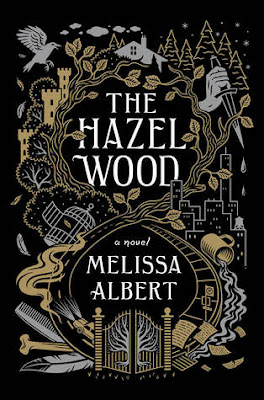 Seventeen-year-old Alice and her mother have spent most of Alice’s life on the road, always a step ahead of the uncanny bad luck biting at their heels. But when Alice’s grandmother, the reclusive author of a cult-classic book of pitch-dark fairy tales, dies alone on her estate, the Hazel Wood, Alice learns how bad her luck can really get: her mother is stolen away―by a figure who claims to come from the Hinterland, the cruel supernatural world where her grandmother's stories are set. Alice's only lead is the message her mother left behind: “Stay away from the Hazel Wood.”Alice has long steered clear of her grandmother’s cultish fans. But now she has no choice but to ally with classmate Ellery Finch, a Hinterland superfan who may have his own reasons for wanting to help her. To retrieve her mother, Alice must venture first to the Hazel Wood, then into the world where her grandmother's tales began―and where she might find out how her own story went so wrong.

The Hazel Wood was a dark, gritty and unique novel. I was intrigued by this story from beginning to end. There was something so consuming and addictive about this book. The author's writing style was captivating and whimsical, I loved it. The plot of this book was interesting, but there were times when the book felt a bit slow. There were a lot of times when the book was so descriptive that it felt like the plot wasn't actually moving anywhere. As I said, I loved the writing, however, I do wish there would have been more excitement and fast-paced plot development throughout the story. The plot that was introduced was so intriguing and I would love to see it developed even more in a sequel.The main character, Alice, was an intriguing and compelling character. However, it was really hard to warm up to her due to how rude she was. I definitely would not categorize her as a likable character, but I appreciated how flawed she was. Alice made a lot of decisions that annoyed me and said things that pissed me off, but at least I understood where she was coming from. A lot of things happened to Alice and I admired her strength. I don't really like Alice, but I appreciate her character. Overall, this was a truly unique and memorable novel. I would recommend this book to anyone who loves a dark and eerie story.3 / 5 Fangs*This ebook was given to me in exchange for an honest review. *
Posted by MissDaemon at 11:41 AM