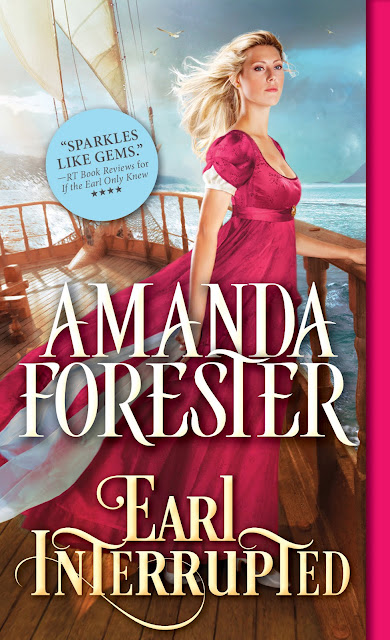 After restoring his fortune as a notorious privateer, Captain Robert Ashton, Earl of Darington, goes to London in search of a bride. Instead, he finds unexpected dangers and unknown assailants. He is shot and left for dead. Life on the high seas was far calmer.

Enter Miss Emma St. James. She may appear sweet and demure, but she quickly proves herself to be equal to any challenge, including saving Darington’s life. Just when Darington is sure he has found his perfect bride, she reveals she’s betrothed to another. 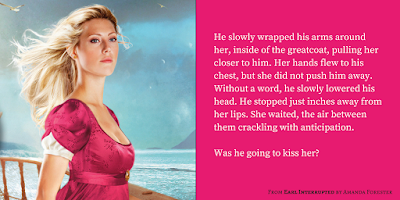 Emma watched in horror as her protector fell to the ground. She raced to him, kneeling in the mud beside him. She lifted his head out of the icy sludge and rested it in her lap. She drew back his greatcoat, searching for injuries. She did not have to go far before she found a large stain of dark-red blood on his waistcoat.
She put a hand to his chest and was relieved to find him still breathing. He appeared to have lost a good deal of blood, and Emma surmised the wound was not fresh. The man was a gentleman by the quality of his clothes. She surmised he must have fallen prey to her vile attackers earlier that day, though how he had come to be entangled with such company and what connection, if any, he had to her step-brother was a question for later. The most pressing need was to save his life.
“Sally, bring the luggage. My medicine kit is inside.” Emma glanced up at Sally, who appeared frozen in place—her eyes wide, her mouth open in horror. “Sally!” Emma repeated, allowing a rare sharpness into her tone. “Bring the luggage immediately.”
Sally blinked. “Yes, miss.” She ran around to the far side of the coach, where the luggage had been tied to the top.
Emma shuddered in the cold of the night. Their attackers’ coach remained on the road, the horses’ breath visible in the pale light of the coach lantern. She needed to get her injured protector inside and somehow drive them all to the next hamlet to get help. To do any of this, she first needed to revive the gentleman.
“Here, miss.” Sally returned with all the luggage, dragging Emma’s large trunk and carrying her own small bandbox.
“Thank you, that is very helpful.” Emma wasted no time in opening her father’s medical bag and finding a vial of smelling salts, waving it under the man’s nose. The man started and opened his eyes with a gasp.
“W-what? Who—?”
“I am Miss Emma St. James. A pleasure to meet you.”
“I am Dare…” murmured the man, his voice trailing off into something inaudible.
Emma smiled at the man. She was not sure what sort of name ‘Dare’ was, but it did seem an apt description. “I am sorry for the rude manner of your awakening, but you have been injured and we cannot tarry.” Emma spoke plainly and pleasantly, as she had found injured people needed hope and a calm presence.
“Go,” the man croaked. “You need to find safety.”
“I will not leave you.”
“You need to go!” said the man in a stronger voice, his dark eyes blazing with intensity. He had angular features with dark-brown hair tied back in a queue. She might have been afraid had she not been cradling his head in her lap.
“I will not leave you here to die in the road,” said Emma firmly. “What a poor way to repay your kindness. I could never live with myself. So we will either leave together or stay here together.” As she spoke, she grabbed some bandages from her bag and pressed them to his wound, wrapping a bandage around his blood-soaked clothes.
The man inhaled sharply through his teeth as she pressed hard against the wound. “Sorry,” she murmured. “This will stop some of the bleeding, but you need a doctor.”
“Your life is in danger,” the man croaked, rousing himself to a seated position beside her.
“My life? Did my brother send these men to kill me?” Emma gasped.
“Your brother? No, those men are after me.”
“After you? But why would my brother be after you?”
They stared at each other, his eyes mirroring the confusion she felt.
“Can we l-leave n-now?” asked a shivering Sally through chattering teeth.
“Yes, let us get Mr. Dare to his feet. If we can get him to the carriage, I can attempt to drive us to safety.”
Between the two of them and the man’s own efforts, they were able to raise him to his feet. He was a tall man, muscular but thin, which was fortunate in getting him back upright.
“Let us get you to the coach and—”
The man lying near them let out a long, low groan. At the same time, a man cried out from the coach with a string of curses. “That bastard stuck me. Help! I’m bleeding like a stuck pig. Where are you lubbers?”
Emma’s heart pounded in her throat. There was another man in the coach. The man in black, the one she thought her rescuer had shot dead, also groaned and moved on the ground. Sally let out a short shriek that was silenced by Dare, who clamped a hand over her mouth. He looked back at the hedgerows. Emma nodded in understanding. Crouching to avoid being seen, they crept off the road and into the bushes.

AMANDA FORESTER holds a PhD and worked for many years in academia before discovering that writing novels was decidedly more fun. Whether in the rugged Highlands of medieval Scotland or the decadent ballrooms of Regency England, her novels offer fast-paced adventures filled with wit, intrigue, and romance.  Amanda lives near Seattle, WA.