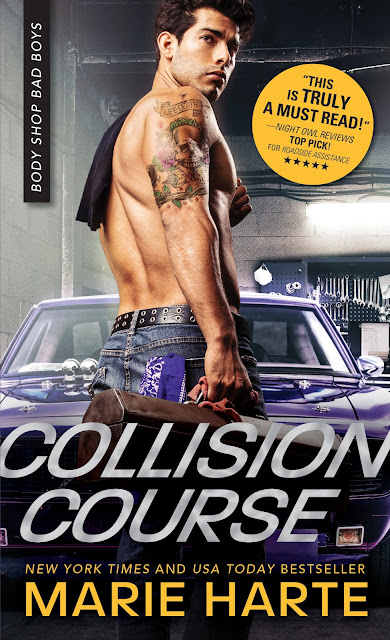 He's always had a way with the ladies
She won't give him the time of day
Sparks fly when two hearts in motion collide.

Florist Joey Reeves is working overtime to stay away from Lou Cortez, the ace mechanic with a reputation for irresistible charm. She's a single mom with enough on her plate—the last thing she needs is entanglement with the hottest guy in town…

Joey glanced up and froze. The man who'd been haunting her sleep looked even better in the hard light of day.

"H-hello." She coughed. The guys who worked at Webster's Garage all looked larger than life, covered in tattoos, muscles, and that indefinable sense of danger they wore like a second skin. But this guy, the tall, Latin lover with dark-brown eyes and lips made for kissing, had ensnared her. 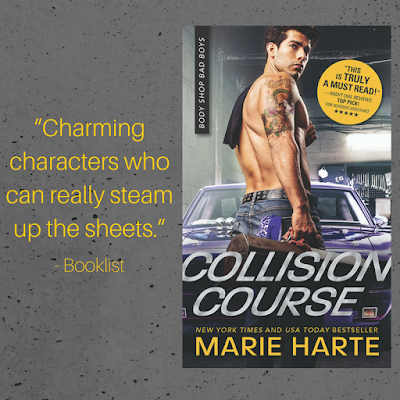 Collision Course was an entertaining new book in the Body Shop Bad Boys series! This book had everything in it that I expected from this series: steamy sex scenes, tons of flirting, and a lot of humor.

The main character, Joey, was such a strong woman. I felt so bad for her because there were so many tough obstacles she had to overcome. Tons of people in her life let her down in the past and I just wanted to give her a hug and make her feel loved. Joey was such a dedicated and loving mother as well, which was really sweet to see. I do think she kept some secrets for too long from certain characters, which was frustrating sometimes, but I understood where she was coming from. I thought the author did a great job at making Joey a very real and relatable woman.

Lou was the smooth-talking ladies man of the book. He knew exactly what to say to make a woman swoon, and he sure did make me swoon with some of his words! But, I liked seeing that there was more to Lou than his sexy and flirty side. He had a lot of passions and emotions that I was not expecting! However, there were times when I was hoping for more from him. There were moments when he did make some remarks and judgments that really bothered me. I understood how and why he had certain views that he did, but I still didn't agree with them. It was nice to see him eventually learn not to make those kinds of comments and judgments.

The romance between Joey and Lou was full of steam and passion. The sexual chemistry between the two of them was off the charts! Marie Harte knows how to make your e-reader feel like it is melting in your hands! There were a lot of trials and tribulations that they had to face, so it added a lot of angst and intrigue to watch them overcome those issues together.

Overall, this was a sexy and fun novel! If you are looking for a book that is steamy and fast paced, then you need to check this book out!