The Whole Thing Together by Ann Brashares 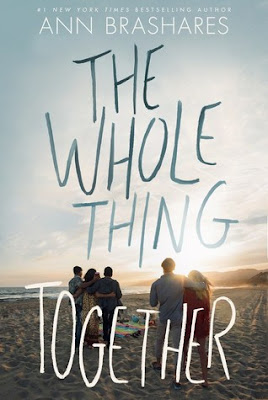 Summer for Sasha and Ray means the sprawling old house on Long Island. Since they were children, they’ve shared almost everything—reading the same books, running down the same sandy footpaths to the beach, eating peaches from the same market, laughing around the same sun-soaked dining table. Even sleeping in the same bed, on the very same worn cotton sheets. But they’ve never met.

Sasha’s dad was once married to Ray’s mom, and together they had three daughters: Emma, the perfectionist; Mattie, the beauty; and Quinn, the favorite. But the marriage crumbled and the bitterness lingered. Now there are two new families—and neither one will give up the beach house that holds the memories, happy and sad, of summers past.

The choices we make come back to haunt us; the effect on our destinies ripples out of our control…or does it? This summer, the lives of Sasha, Ray, and their siblings intersect in ways none of them ever dreamed, in a novel about family relationships, keeping secrets, and most of all, love.

It pains me that I didn't like this book because I had such high expectations for this book! I really wanted to like this book, and I did like a few parts of it, but the parts I didn't like definitely outweighed the positive aspects of this book. The first thing I didn't like about this book was how confusing it was. There were a lot of characters so it was hard to connect with any of them. A lot of the characters seemed so similar that I really couldn't keep track of what was happening to which person. I thought there were some interesting plot points that were brought up, but because there were so many characters with different story lines, those plot points didn't get fleshed out. I think it would have been less confusing if there were fewer POVs. I think Sasha and Ray should have been the only POVs, because that would have been easier to follow. I think this book could have been split up into multiple books so it would have been less confusing and easier to connect with the characters. The thing that bothered me the most in this book was the sometimes subtle and sometimes not so subtle sexism, stereotyping, and racism throughout the story. The most noticeable racism in this book came directly from a female character, Mattie. In the book, Mattie was considered to have gotten blessed with her looks because she had blonde hair and blue eyes. These physical characteristics made her feel superior and more attractive than her siblings who looked more "Indian" and "exotic". She loved that she had lighter skin, hair, and eyes, but still could be "unique" because of her ethnicity. That felt so wrong and just disgusting to me. That did not sit well with me at all. Mattie was also so petty and rude when it came to other women. Mattie didn't wear makeup, and she thought poorly of those who did. She seemed to think she was better than women who would wear makeup. I HATE IT when women bash other women for wearing makeup. It is one my biggest pet peeves. Women should be supporting other women, not bringing them down. Also, she seemed to also bash other women who didn't like what she liked??? Excuse me???

So, Mattie was the worst. Overall, there were too many negative things in this book for me to enjoy it. I wanted to like this book, and some of the storylines had potential, but I just couldn't bring myself to like this book. 1 / 5 Fangs*This ebook was given to me in exchange for an honest review. *