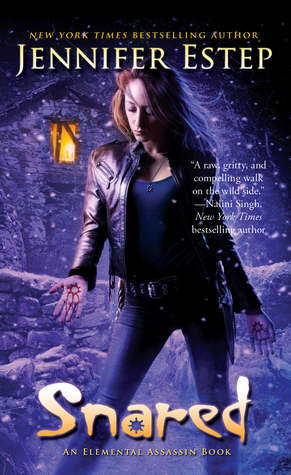 Irony 101—The Spider herself snared in someone else’s web…

Another week, another few clues trickling in about the Circle, the mysterious group that supposedly runs the city’s underworld. Gathering intel on my hidden enemies is a painstaking process, but a more immediate mystery has popped up on my radar: a missing girl.

My search for the girl begins on the mean streets of Ashland, but with all the killers and crooks in this city, I’m not holding out much hope that she’s still alive.

A series of clues leads me down an increasingly dark, dangerous path, and I realize that the missing girl is really just the first thread in this web of evil. As an assassin, I’m used to facing down the worst of the worst, but nothing prepares me for this new, terrifying enemy—one who strikes from the shadows and is determined to make me the next victim.

Snared was a great way to pull me back into the criminal world of Ashland in the Elemental Assassin series.  Gin is the assassin the Spider but she has also recently become the boss of the underworld. Although, she now knows the Circle is a group of powerful men and women who are trying to hurt her and her friends. Gin is done waiting for them to attack her. She's ready to go on the offensive. Her first mark is Daniel but when a new friend's sister goes missing and the clues point to a serial killer, Gin can't look away. She's determined to find the killer and made him pay for all his prior transgressions.

I liked that this book had the serial killer vibe. I was feeling the same desperation Gin was experiencing. I knew she was running out of time in finding the girl and the culprit before it was too late. There was a lot of action and even better, someone I had come to dislike is making the transition to someone I might consider liking in the future which is great because Gin needs all the friends she can make to be able to keep fighting.

Overall, I was engaged the whole way through. Gin keeps on maturing and accepting help when it's needed.

A complimentary copy was provided by Pocket Books in exchange for an honest review.