Welcome to the blog tour for Maybe Never by Sadie Allen! I am so excited to share this sexy contemporary romance with you! Be sure to check it out and follow the blog tour! 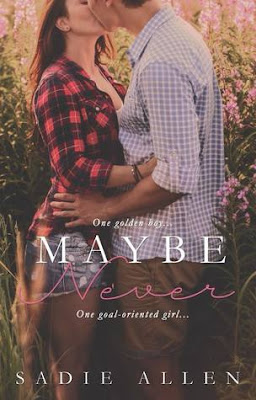 One golden boy... Judd Jackson had it all—star football player with a college scholarship, perfect family, tons of friends, and a beautiful girlfriend. He was the most popular guy in town … until a family secret burned it all to the ground. Now, he’s the object of scorn and ridicule, and the only thing he has left is his scholarship and counting down the days until he can leave town.

One goal-oriented girl... Sunny Blackfox was alone in the world, but she had big plans and big dreams to keep her occupied. She didn’t have time for anyone in her life. That was, until she came to the rescue of the boy she always had a thing for. They have everything going against them, but maybe, if they are lucky, they will make it out of town after graduation together ... or maybe never.

Molly plopped down on the bright red monstrosity, spreading her arms out along the back and rubbing her hands along the fabric. “Y’all can run along now, fellas!” she called out.

Harry again walked through the door without a word while Rex followed, a swagger in his walk, and left with only a “Ladies” before closing the door behind him.

Molly rolled her eyes. “You have to watch out for that one. He gets more panties to drop to the floor than any guy I know, including your boyfriend.”

I walked over and plopped down beside her. “He’s not my boyfriend.”

“He’s not my boyfriend.” I could feel my face turn the same shade as the couch.

“Didn’t look that way Saturday. He was all up in your biz-ness.” I could feel her looking at me, but I refused to turn her way.

“Sure, sure.” Her tone was anything but believing.

“Speaking of friends …” I looked at her from the corner of my eye and saw that she was still sitting in the same position as before, except she was angled in my direction now. “Greg quit the diner. Why didn’t you tell me he was leaving for basic?”

Her faced closed down, and she dropped her arms from the back of the couch. “Why would I know something like that?” she asked, her eyes fixed somewhere on the floor in front of her.

I shifted my body so that now I was the one facing her. “Uh, well, y’all are friends. You’re the only person I have ever seen him say more than one word to.” I watched as her face twisted for a minute, before she seemed to catch herself. Then she blanked into the mask of indifference I was used to seeing when she didn’t want to talk about something.

I was about to call her on it, when my phone sounded with a text alert. Confused because the only person who ever texted me was sitting beside me, I got up and retrieved my phone from my backpack on the floor.

One simple word, yet I felt a smile curve my lips.

“Yeah, sure, he’s not your boyfriend.”

I looked over at the couch to see Molly watching me from over the back.

“He’s not.” I felt like I had said that too many times in the last five minutes.

I typed out a response to Judd then carried my phone with me back over to the couch. When I sat down, the phone went off again in my hand.

Judd: I thought you’d be asleep. What are you doing?

I couldn’t keep the smile off my face if I tried, even after I heard Molly snort.

Judd: Yeah, so what are you doing?

Me: Talking to Molly. She brought me a couch.

I looked up from my phone and saw her still watching me.

“Like I said, we’re just friends.” I shrugged, trying to play off my reaction to Judd’s texts.

“That doesn’t answer my question.”

I didn’t want to answer her question. I could barely admit to myself that I liked him, let alone say it aloud.

Sadie Allen lives in Texas with her family and her dog Penny. When she’s not writing, she’s reading, catching up on her favorite shows, or chasing her family around the house.

Zili in the Sky Review

What Is That Book About Excerpt