Well you’re in luck because Katie just released a FREE epilogue novella, After the End, that features all of your favorites! You can download it for free at most online retailers.

You can also enter in to win an autographed set of the Search & Rescue series plus an advance reader copy of Run to Ground, the first book in Katie’s new Rocky Mountain K9 Unit series!

And there’s a sneak peek of the upcoming release Run to Ground below, enjoy! 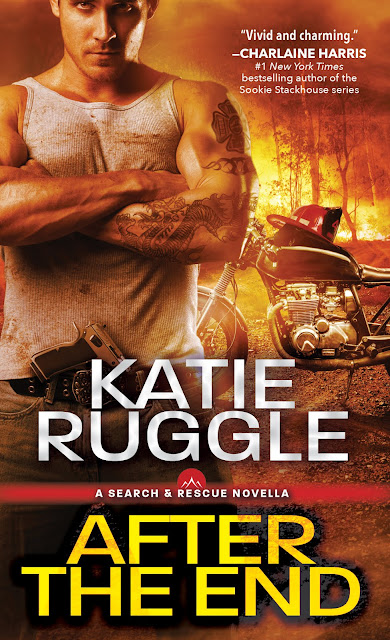 What happens after happily ever after? Now that the murderer has been caught and the arsonist is behind bars, the town of Simpson, Colorado has returned to its sleepy, picturesque former glory. Yet for the heroes of Search & Rescue, work is never done…

…especially not if the extraordinary women if their lives have anything to say about it.

Told in alternating chapters focusing on four unforgettable romances, this slice-of-life novella catches up with fan favorites from Katie Ruggle’s Search & Rescue series—proving once and for all that the end is just the beginning.

After the End is the fun and heart-warming epilogue novella to the exciting Search & Rescue series by Katie Ruggle. 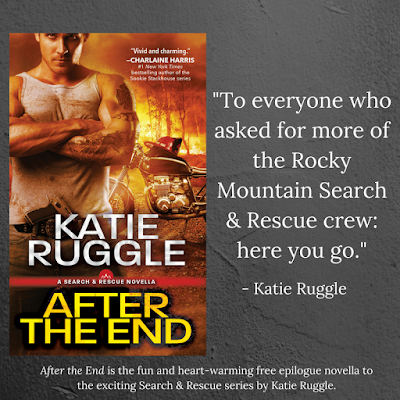 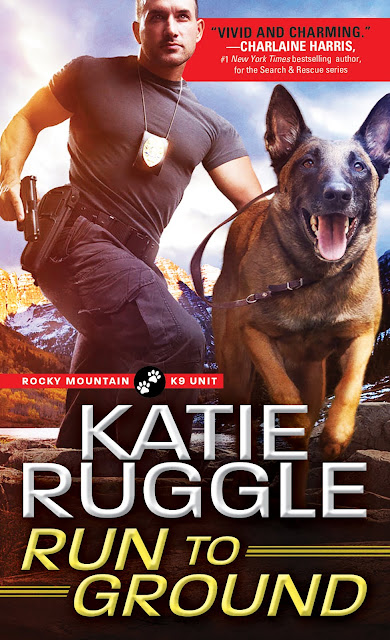 First in Katie Ruggle's thrilling new Rocky Mountain K9 Unit series.
He lost his mentor.He lost his K9 partner.He almost lost his will to live.But when a killer obsessed with revenge targets a beautiful woman on the run, Theo and his new K9 companion will do whatever it takes to save Jules before they lose their last chance at a happily ever after...Theodore Bosco, grieving the death of his partner, is reluctantly fascinated by secretive newcomer Jules. Although his instincts scream that he should avoid her, he can't seem to stay away. It doesn't help that Theo's new K9 companion, Viggy, has fallen head over paws with Jules's rambunctious family. Or that when he's with Jules, Theo finally knows peace.When Jules kidnapped her siblings, whisking them away from abuse to the quiet anonymity of the Colorado Rockies, she never expected to catch the eye-or the heart-of a cop. All it would take is one wrong move and she'll lose everything. Yet as Jules attempts to fight her growing attraction to the brooding K9 officer, another deadly threat lurks much closer to home. Someone's gunning for Theo and Viggy, and they're willing to take out anything...or anyone...who gets in the way of revenge.

The new waitress was hot. Squirrelly, but hot.

Theo always got to the diner early for the K9 unit’s breakfast and informal roll call. Those fifteen minutes before Otto and Hugh showed up usually were, if not exactly peaceful, at least a break from having to hide the mess he’d become. This morning, though, he was distracted by the way the dark-haired stranger kept trying not to stare at him. Since she didn’t seem to be bothered by anyone else in the diner, Theo assumed his uniform was making her nervous—and her nerves were putting him on edge. He’d caught himself watching her four times already, and he’d only been in the diner for five minutes.

A mug thumped on the table in front of him, and Theo turned his frown toward Megan. They had a morning ritual: He scowled. She aggressively delivered his food and coffee. Neither said a word.
This morning, as Megan was turning away, Theo was almost tempted to break the silence. He caught himself before a question about the new server popped out of his mouth. Stopping the words just in time, he snatched up his coffee and took a drink, burning his tongue in the process. He set down the mug with enough force to make the coffee almost slosh over the rim. Shit.

Before Theo could stop himself, his gaze searched out the new waitress again. She was delivering two plates of food to a table across the diner. By the look of concentration on her face and the exaggerated care she was taking, Theo assumed she was new to waiting tables. She was definitely new to Monroe, Colorado. If she’d been around, he would’ve noticed her. There was no doubt about that.

As she turned away from the table, smiling, their gazes caught for a second before she ducked her head and hurried toward the kitchen. He knew he shouldn’t take it personally. Theo had the feeling she would have had the same response to any cop.

“Who’s that?” Otto dropped onto the bench next to him.

“No.” Otto stretched out his legs until his lumberjack-sized boots bumped the opposite bench. “I always sit here.”

Just for the past two months. Theo didn’t want to say that, though. That might’ve led to talking about what had happened two months ago, and he really didn’t want to discuss it. Still, he couldn’t let it drop. “I’m not one of your wounded strays.”

Otto made a noncommittal sound that heated Theo’s simmering anger another few degrees. Before he could rip into Otto, Hugh slid into the opposite side of the booth.

“Hey.” Hugh greeted them with his standard, easygoing grin. “Who’s the new waitress?”

“You’re not going to squeeze onto this bench, too?” Theo asked with thick sarcasm.

Hugh gave Theo a too-earnest look. “Did you want me to sit with you two? Because I can. It’ll be cozy.”

Several smart-assed retorts hovered on Theo’s tongue, but he swallowed them down. All that would do was convince Hugh to move to Theo’s and Otto’s side of the table, and they’d be uncomfortable and awkward all through breakfast. Behind Hugh’s placid exterior was a mile-high wall of stubbornness.

With a slight smirk, Hugh settled back on his side of the table. “Anything fun and exciting happen last night?”

“Eh,” Otto said with a lift of one shoulder. “Carson Byers got picked up again.”
Hugh frowned. “That’s not fun. Or exciting. In fact, that’s something that happens almost every shift. What was it this time?”

“He was drunk and thought the Andersons’ house was his again?”

“The Daggs’ place this time.”

“Wait. Isn’t that on the other side of town?”

Only half listening, Theo let the other men’s conversation wash over him. His gaze wandered to find the new server again. She was topping off the coffee mugs of the customers sitting at the counter as she listened to something Megan was telling her.
“I ran into Sherry at the gas station last night.”

Otto’s too-casual statement jerked Theo’s attention back to their conversation.

Rubbing the back of his head, Hugh asked, “How’s she doing?”

“Not good. But what do you expect when her dad—”

“Let me out.” Theo cut off the rest of Otto’s words, glaring at him until the other man slid out of the booth. As Theo stalked from the table, there was only silence behind him—a heavy, suffocating silence. He didn’t have a destination in mind except away, but his feet carried him toward the new server as if they had a mind of their own.

The woman watched him, her blue eyes getting wider and wider, until he stopped in front of her. They stared at each other for several moments. She was even prettier and looked even more scared up close. There were dark shadows smudged beneath her eyes, and her face had a drawn, tight look. Her throat moved as she swallowed, and her eyes darted to the side. Theo tensed, his cop instincts urging him to chase her if she ran.

“Theo,” Megan barked as she passed, “go sit down. You’re being creepy.”

He shot her a frown, but most of his attention was still on the new server. “What’s your name?”

She swallowed again and tried to force a smile, but it quickly fell away. “Jules. Um…for Julie.” Even in those few words, her Southern drawl was obvious.

“Uh…Jackson.” Her gaze jumped toward the door.

“Where are you from?” He couldn’t stop asking questions. It was partly his ingrained curiosity, and partly a personal interest he couldn’t seem to smother.

Theo called bullshit on that. While she’d said her last name too slowly, this had come too fast, like he’d asked her a quiz question that she’d studied for. He could see the tension vibrating through her, her body projecting the urge to flee. What was she running from? An abusive husband? The consequences of a crime she’d committed? “What brings you to Colorado?”

“It’s…a nice state?” Her eyes squeezed closed for a second, as if she was mentally reprimanding herself.

Every glance at the door, every stifled flinch, every half-assed response just made Theo more suspicious. “You move here by yourself?”

“I…um…” Her hunted gaze fixed on Megan’s back, but the other server was occupied helping a little boy get ketchup out of a recalcitrant bottle and didn’t see her silent plea. “I should get back to work.”

“Wait.” Without thinking, he reached for her arm.

“Theo.” Hugh stood right behind him, and Theo’s jaw tightened as his hand dropped to his side. Why did they feel a need to watch him like he was an unstable bomb? “Food’ll be here soon.”

Theo didn’t want to return to the table, didn’t want to eat, didn’t want to talk about Sherry or anything else. What he did want was to find out more about the new, pretty, squirrelly waitress whose name may—but more likely may not—be Julie Jackson.

He was tempted to send Hugh back to the table without him, but what was the point? All she would do was keep lying…badly. Later, in the squad car, he’d run her name, although “Julie Jackson” from Arkansas would produce enough hits to keep him busy for months.

He’d give it time. They were at the diner every morning. He’d have plenty of opportunities to try to get information.

Ignoring his screaming instincts—his curiosity—his interest—he gave a short, reluctant nod and returned to the table. He could wait.

Still, it was hard not looking back.

a Rafflecopter giveaway
Posted by MissDaemon at 10:43 AM