The Perfect Stranger by Megan Miranda 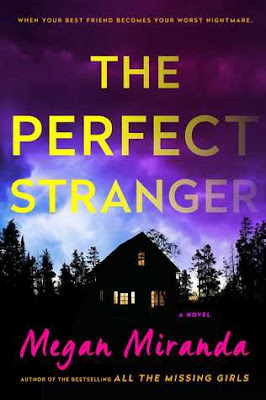 In the masterful follow-up to the runaway hit All the Missing Girls, a journalist sets out to find a missing friend, a friend who may never have existed at all.


Confronted by a restraining order and the threat of a lawsuit, failed journalist Leah Stevens needs to get out of Boston when she runs into an old friend, Emmy Grey, who has just left a troubled relationship. Emmy proposes they move to rural Pennsylvania, where Leah can get a teaching position and both women can start again. But their new start is threatened when a woman with an eerie resemblance to Leah is assaulted by the lake, and Emmy disappears days later.

Determined to find Emmy, Leah cooperates with Kyle Donovan, a handsome young police officer on the case. As they investigate her friend’s life for clues, Leah begins to wonder: did she ever really know Emmy at all? With no friends, family, or a digital footprint, the police begin to suspect that there is no Emmy Grey. Soon Leah’s credibility is at stake, and she is forced to revisit her past: the article that ruined her career. To save herself, Leah must uncover the truth about Emmy Grey—and along the way, confront her old demons, find out who she can really trust, and clear her own name.

Everyone in this rural Pennsylvanian town has something to hide—including Leah herself. How do you uncover the truth when you are busy hiding your own?

After reading All the Missing Girls, I was dying to read another thriller by Megan Miranda. I couldn't wait to get my hands on The Perfect Stranger.

I can tell you that I was invested in the story from the first chapter. The pages of the book pretty much turned themselves. The Perfect Stranger was full of mystery, suspense and a sense of thrill surrounding the main characters.

The story:
After a bad decision, Leah Stevens loses her career, boyfriend, and her life in Boston in a blink of an eye. With her life ruined, she knows she needs a fresh start. When she bumps into Emmy, an ex-college roommate and she's offered the chance to start over in a small town in Pennsylvania, she doesn't think it twice. Her new job as a high school teacher is different than her prior career but she's getting used to it. Everything seems to be going well until a woman is found beaten not too far from their home. Worse, she soon realizes her friend Emmy is missing too.

Kyle Donovan is the detective in charge of the investigation. He wants to get to the truth but even though Leah seems helpful, he knows she's still hiding too many things. Leah for her part is performing her own investigation in regards to her friend's disappearance when she realizes the police are doubting Emmy was real, to begin with.

Megan Miranda gives you whiplash with the intrigue she sets up in The Perfect Stranger. I was doubting everyone's motives. I jumped to too many conclusions and changed my mind constantly trying to keep up with the different outcomes. The one drawback for me was the ending. I guess I was hoping for a much more crazy outcome.

Overall, I did enjoy it and I know I want to read her next book.

A complimentary copy was provided by Simon and Schuster in exchange for an honest review.