Shoulda Been a Cowboy (Copper Ridge 0.5)
by Maisey Yates 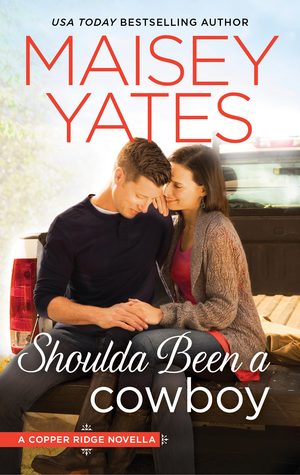 This was a cute, second-chance romance between the good girl and bad boy of Copper Ridge.

Back in high school, Cassie let fear hold her back from going after what she truly wanted.  One afternoon she was tutoring Jake, trying to find the courage to tell him how she really felt, and the next he was gone.  Never giving her the chance to be honest.

It's fifteen years later, when he pops up in the small town of Copper Ridge, to settle his father's estate.  Copper Ridge is full of nothing but bad memories and regrets for him. Seeing Cassie stirs up something in him though.  She was the only one that ever looked at him like he was more than just tattoos and a leather jacket.

Cassie owns the town's coffee shop, which happens to be one of the properties that Jake's father left him.  So, it's inevitable they'll run into each other.  Not having a lot of experience, Cassie decides being direct is the only way to go.  It's funny and even a little awkward at times, but she gets her man.  Although nothing can be permanent, because he has no desire to stay in town.  But sometimes plans unexpectedly change.

"I will poison your muffin."

"I am now. Ruthless about what I want. And I want you."


This is the second book that I've read in the Copper Ridge series and I really like the small town, family feel of each of the stories.  Cassie and Jake's story was fun and it was a really quick read.  Maisey Yates is great at mixing humor into her stories.  I found myself laughing out loud a few times. I just wish the story had been longer, so we could have seen more of them falling.  I get that it was only a novella, but their forever felt a tiny bit rushed for me.