FLIRTING WITH FIRE by Kate Meader-- Interview and Review 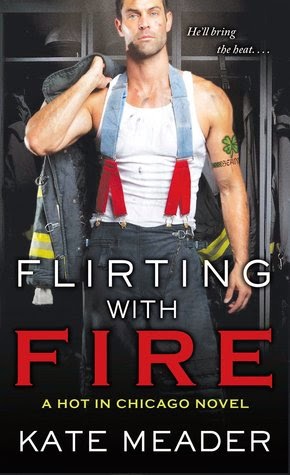 Kinsey uprooted her life in Cali to move with her fiancé to Chicago.  She left her family, friends and dream job so he could follow his career.  Shortly after she arrives, he tells her he’s met another woman and it’s over.

Now, working as the PR for the mayor of Chicago, Kinsey is assigned a new job of cleaning up Engine Co. 6’s viral video nightmare.  That’s where she meets hothead, fist-first, Luke.

“He was an alpha predator, a guy who turned to violence to solve his problems, a man who looked like a suit or a job or a woman could never contain him.”

Luke Almeida is a Dempsey through and through.  He has always protected his family first, and with his outburst that was viewed by everyone his family is in jeopardy of being separated into different firehouses.  When fierce, all-woman, Kinsey comes in to clean up his mess, he knows he better do whatever she says if he wants his family to stay together.

You guys, I’m ashamed to admit that this is my first firefighter book! How have I not read about hot and sexy firemen?!  But let me tell you, I am so happy this was my first.  I loved everything about FLIRTING WITH FIRE.

Kinsey is a total “alpha” female. Her ex-fiancé despised it, but Luke finds it right up his ally.  She is competitive, likes to win, and isn’t ashamed of it.

Luke is the typical “alpha” male.  He see’s what he wants and he takes it.  No apologies.  So when these two alphas get together it’s explosive.

“You’re lucky that right now your job objectives coincide with mine, Kinsey.”  Brute hands caged her on either side.  “But when you stray your honeyed a** onto my turf, in my firehouse…..”  He brushed his lips against her ear.  “When you come within a five-mile radius of my body, baby, you need to leave your job at the door and let me take charge.”

I also fell for the secondary characters.  The siblings were so involved and loving that I am now impatiently waiting for the next installment of this series!

FLIRTING WITH FIRE is a sexy romance novel about finding love after being betrayed by those you trust.  It’s heartwarming and hilarious.  I couldn’t flip the pages fast enough.

1    Mrs Alcide: Describe FLIRTING WITH FIRE in one sentence.
Kate Meader: A hothead Irish-Cuban firefighter locks horns with an ice-cool publicist sent in to clean up his act—and when fire meets ice, there’s plenty of steam.

MA: Where did you get the inspiration to write FLIRTING WITH FIRE?
KM: I imagined what the cover of my future firefighter book might look like and the inspiration flowed like honey… I’m just kidding, but have you seen the hot-as-the-hinges-of-hell cover for FLIRTING WITH FIRE? Who wouldn’t want to write (and read) about every day heroes with dirt-streaked muscles and blue eyes and shamrock tats and suspenders? Okay, for real now—you could say I was inspired from a few different sources. I know Chicago firefighters. I’m originally from Ireland, so I appreciate the bonds of family that are inherently Irish. And I love the show, Chicago Fire! I was born to write this book J

MA: Tell us a little about this series.  How many books will there be, are they all standalone, etc.
KM: The series focuses on the firefighters at Engine 6, the oldest firehouse in Chicago, and more specifically on the Firefightin’ Dempseys who rule the roost. There are five of them—four guys and a gal—and they are the foster children of a legendary firefighter named Sean Dempsey, who has already died in the line of duty before FLIRTING WITH FIRE starts. They live by the lessons Sean taught them: fire is stronger than blood and defend the people you love until the dying embers. So far, I have planned a novella and three full-length books, all standalone. Each book will have a primary couple and there will be a hot m/m secondary romance between sexy firefighter Gage and a gruff former-Marine-turned-gourmet-chef that will arc over the three longer books. Here’s the planned order:

MA: A lot of authors use celebrities or models for character inspiration.  Do you have a celebrity or model you’ve used for Kinsey or Luke?
KM: I don’t usually have famous peeps in mind when I write, but if I had to choose... Luke is a little rough around the edges, so I’d probably go with Hugh Jackman (Wolverine version but without the sideburns and titanium claws). And as Kinsey is a cool California blonde, I think Charlize Theron would be an excellent fit. God, could you imagine what the children of Hugh and Charlize would look like? Mama mia!

MA: Can you tell us about BABY, IT’S COLD OUTSIDE? Is it recommended to read this before FLIRTING WITH FIRE?
KM: BABY, IT’S COLD OUTSIDE is a five-author anthology of winter tales. One of the stories is REKINDLE THE FLAME, featuring sexy Puerto Rican firefighter Beck Rivera and heiress-turned-tattoo-artist Darcy Cochrane. While it introduces the Hot in Chicago world and all the heroes in the longer books, it’s not necessary to read it before FLIRTING WITH FIRE. In fact, I had already written FLIRTING before the novella, so I had to go back in and add Beck, hero of REKINDLE, to the Dempsey brood of foster kids later.

MA: Do you have any crazy habits or rituals while you write?
KM: Ha, someone asked me this a while back and I said: Before I begin each day, I walk three times around my writing desk and whisper “Praise to the goddess, Jill Shalvis.” LOL – just kidding! Sorry to disappoint, I can’t say I have any.

MA: Do you read while you write?  Any books you’d love to recommend? Do you have any go-to authors?
KM: I do read while I write. I know some writers are worried that they’ll absorb other writers’ ideas/tics/language, but I love to read so much that I couldn’t give it up while writing a book. Sometimes, I read more historical or erotic romance while I write because it’s a nice break. As for recommendations, I’m loving Jessica Lemmon’s new Bad Boy series and Lauren Layne never disappoints with her Sex and Stiletto books. She also has a new series out this summer about an NYPD family of heroes that I can’t wait to read.

MA: Tell us something fun about yourself.
KM: I got married in a tenth century Italian castle. That’s pretty fun, right? RT Book Reviews did a great article on it, complete with pics: http://www.rtbookreviews.com/rt-daily-blog/real-life-romance-kate-meaders-fairytale-love-story

MA: What are three things you couldn’t live without if stranded on a desert island?
KM: I’m supposed to say my husband here, I believe J And my Kindle. And maybe a pen/paper. In that order (yes, I know that’s four things, but my husband might object to me calling him a thing).


MA: I love the name Kinsey.  How do you pick the names for your characters?
KM: I don’t use a book or website, I just wait for inspiration to strike! But I’m not always tied to them—I’ve been known to change a name half-way through. For example, Darcy in REKINDLE THE FLAME was originally Lucy, but it sounded too close to Luke, the hero of FLIRTING WITH FIRE, so she got whacked and reborn as Darcy.
Posted by MrsAlcide at 1:42 PM