FIX YOU by Beck Anderson 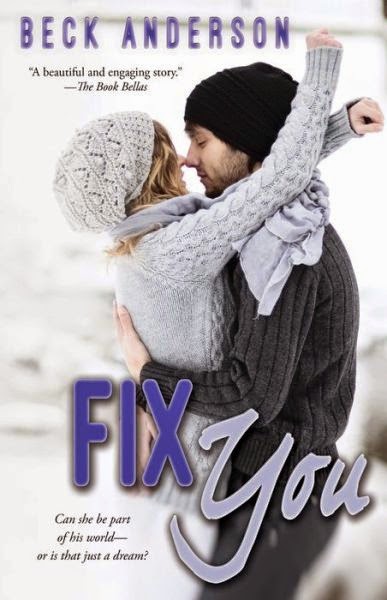 “Well, what’s it going to be? Stand up here and think about all the ways you’re going to crash, or jump in and ski already?”

Kelly’s husband died and left her a widow to take care of their two sons.  After two years she is still trying to piece her life back together by doing routine things like running and taking care of the boys.

Andrew is an actor and has had a tough past.  He and Kelly meet and they have an immediate connection despite Kelly’s fears of taking risks.  Andrew loves the calm and peace he feels around her.

Despite their extreme differences, will they be able to make it work? Or will the secrets they harbor hold them back from true happiness?

I really, really enjoyed this book.  It’s about finding love after tragedy and healing in the process.  Andrew was so patient with Kelly and he knew he wanted her from the beginning.

“Can I get your number?”

“You want my number?”

He stares at me with those very blue eyes.  “Don’t be ridiculous. Give me your number.”

Kelly was a little harder to relate to.  She was so self-deprecating at the beginning, but I really grew to like her.  She was extremely strong when some women would have just caved.   And she wasn’t about drama.  So many times she could have thrown a fit or caused a scene but she didn’t.  It was such a breath of fresh air.

I will definitely be reading more by Beck Anderson.  FIX YOU was such a happy romance about two deserving people of love and second chances.

He looks mad.  “Awkward?  You’re real! God, you have no idea how desperately I need someone like you in my life.  I lie for a living.  I’m surrounded by plastic.  Then you came along.”

*Complimentary copy provided by publisher in exchange for an honest review*