An Irresistible Bachelor by Jessica Bird 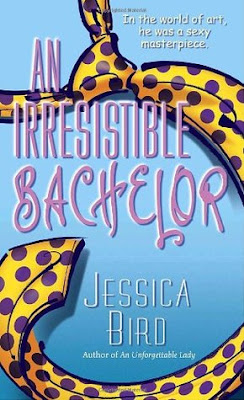 Callie Burke is the half sister of Grace Hall (Heroine featured in an Unforgettable Lady). The sisters recently met. Grace's father was a millionaire who had an affair with Callie's mother.

Grace introduces Callie to Jack Walker who is a rich womanizer. He hires her to restore a masterpiece which he recently recovered after paying five million dollars for it.

Jack recently got engaged, but his attraction to Callie is instant. He has been dreaming about her ever since they met. He doesn't give up until she agrees to work for him and move to his estate. They will live under one roof until the job is completed.

Jack has political aspirations and he is thinking of running for Governor. Once he falls in love with Callie, he wonders if he can give up his dream since Callie seems to be opposed to it.

Callie was raised without money. She is the bastard child of a millionaire who was never there for her. Her mother never accepted money or gifts from him and died of MS. Now is time to make choices. If she stays with Jack, the press may learn about her secret past. But she doesn't want her sister Grace, a rich socialite, destroyed by the their father's indiscretion.

Can she leave Jack behind or stay and hurt the only family member she has left?

The second book in this series has cameos from members of other books written by Jessica Bird. It is a fast read and enjoyable. I did not like it as much as An Unforgettable Lady. Maybe because John and Grace seem to have more spark and mystery.