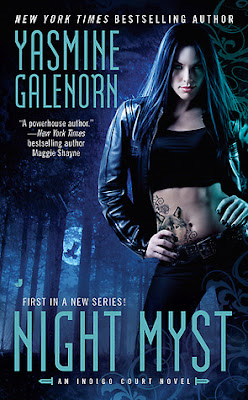 Cicely Waters is a twenty-six-year-old witch, who can you use a wind Elemental (Ulean). She returns home to Forest, Washington after a witch elder is murdered. She has been on the run and the last time she saw her boyfriend Grieve was nine years ago when he asked her to stay and she declined.

When she arrives, she finds out her aunt Helen has been kidnapped. She stays with her cousin Rhiannon, who has the ability to use the Fire Elemental but doesn't know how to handle the power.

Some new force is kidnapping and killing the magic-born. The victims are drained, like vampires. The Northwest Regent of the Vampire Nation, Geoffrey summons her and we meet Lannan, a vampire from the Crimson Court with some sadistic tendencies. Cicely is forced to help the vampires obtain information from the Fae.

Grieve is a Fae Prince in the court of Rivers and Rushes, nephew to Lanule, the Queen. He met Cicely when she was six and fell in love with her. Unfortunately, Myst, the Mistress of Mayhem, Queen of the Indigo Court has taken over the Fae. She is the Queen of a new race of Vampiric Fae and she is out for revenge against vampires. The Vampiric Fae can only turn the Fae and magic-born. Grieve has been turned and now he is Shadow Hunter who can feed on humans and Fae alike.

In the middle of this new brewing war is Cicely, torn between helping the vampires, saving her family, or saving the life of her love Grieve.

This new series has potential. I like Cicely and enjoyed some of the secondary characters like Chatter, whom I like more than Leo at times, Kaylen Chen, Peyton and Rhia. I don't think I like Lannan. His bizarre relationship with his sister/lover/mate was unnerving.