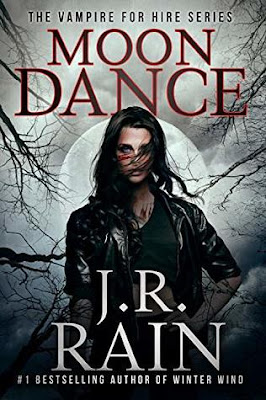 Samantha is a married woman with two small children. However, she is not your typical mom. Six years ago she was attacked by a Vampire and left for dead. Her husband Danny and her sister are the only ones who know the truth. Lately, her husband has been acting strange towards her. When she was attacked, he helped her come up with an excuse to avoid daylight. The rest of the world thinks she has xeroderma pigmentosum.

She had to leave her day job as a federal agent. She started her own PI agency which she runs from inside her house.

The police usually sends referrals her way. This is how Kingsley Fulcrum becomes her client. He is a very important lawyer who was shot five times in the head and survived!! (I'm guessing he is not human- just a hunch)

He hires her to find out who attempted to kill him. She feels attracted to him but feels loyal to her husband, despite suspecting Danny is having an affair.

We also meet a Vampire Hunter, Randolph, who is trying to kill her and an internet friend who helps her deal with her day to day living.

This is a fast and easy read. Entertaining. It is a first good effort.

This book doesn't answer some important questions. Who attacked her? Why her? Where is the Vampire now?