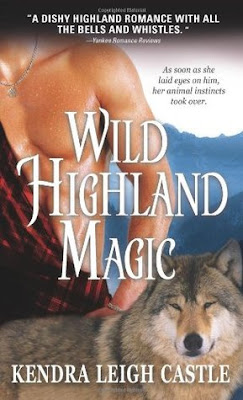 Bastian a Morgaine has been cursed.

For five generations his family has endured the shadow of a Narial, a beast and a soul eater. He is the last of his bloodline and a mixture of a Dyadd (blood-drinking Sorcerer) and an Athin (Ice Mage who can travel through worlds and can manipulate water/ ice). Any strong emotion brings on an attack from the Narial, especially happiness and love. He has lived a lonely life, unattached and remote from everyone. Recently, an oracle has given him hope, the blood of a Dragon, freely given can save him. He rescues Lucien Andrakkar, a dragon, from the realm of the Demons, and takes him to recuperate to the clan MacInnes property.

Catrionna MacInnes has come to Scotland to meet his uncle Duncan MacInnes, the alpha of the clan. She and her sisters, Skye and Polly, traveled with their father who has not been a part of their lives and who never taught them how to deal with becoming werewolves. She is happy to meet her uncle Duncan and feels an instant connection with him and the land.

When Cat meets Bastian time stops and she knows there is more to this sourly sorcerer Prince than meets the eye. Her reaction to him is the most powerful she has had towards a male. Bastian tries to keep her away from him but this doesn't last long. He can't fight his feelings and he knows if he may endanger her if he falls for her.

As a bonus the secondary story of Polly and Lucien. When Polly discovers that Bastian is hiding Lucien she feels determined to heal him back to life. Lucien feels he doesn't have anything to live for until he meets Polly. Their banter is quite entertaining and soon turns into more.

This is book 3 of the series but can be read as a stand-alone. Characters from prior books appear in several parts of this one. I am hoping she writes about Skye. The one sister with no happy ending. It is a fast, enjoyable read. It reminds me of the World of the Lupi.