Once Bitten (Haven #1) by Kalayna Price 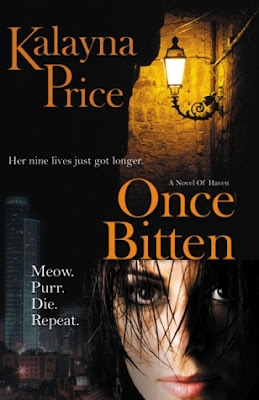 Kita Nekai is a shifter from Firth. She can turn into a calico cat which is the reason for her peculiar tri color hair. She has run away from her birth place avoiding becoming her father's successor as the clan leader and because the man she loved, Bobby mated with someone else. She has been on the run for five years successfully. Her luck is about to change.

She arrives at Haven and discovers that the city is surrounded by Hunters, wolves who want to take her back to her father 's realm. Trying to escape the hunters she goes into a rave party where she is drugged and later attacked by another shifter. Nathanial, the Hermit, a vampire interrupts them. He proceeds to feed from her and is unable to stop himself. She becomes a vampire.

While she is trying to deal with this new state of her life, Bobby finds her and she learns that there is a rogue serial killer attacking women and she may have been responsible for turning him into a shifter. A Mage Judge marks her and if she doesn't find the rogue, not only is her life at stake but Nathanial and Bobby's.

Half of the time she is starving herself avoiding drinking blood. When she does feed she acquires memories from whom she feeds and this scares her. Is unknown if she will be able to shift again. Most vampires have some special powers. Nathanial is an illusionist, he can also fly.

When the Vampire Council learned about the Hermit's new Companion they are summoned to it. She is introduced to Tatius, an ancient vampire, King of Haven, who immediately becomes interested in her. We know there will be more interaction between both.

I enjoyed this new mythology, especially Nathanial and Bobby. I know she can't end up with Bobby. I mean he has a mate and cubs on the way. At times I was upset at Kita for pushing everyone away including Nathanial. She also didn't think before talking and most of the time she didn't take his advice. But, I hope she learns better in books to come.

"You told Samantha you anticipate us going separate ways after tonight."
I shrugged. “We have to live through tonight first."
"You cannot leave alone. If you did not notice, a young vampire without a master is anyone's meat. Every inch of known land is charted as territory for some vampire somewhere. There is nowhere you can run or hide. You are mine, I will watch over you until you are stronger, but you cannot run off."
"I'm not a possession, nor am I your mate. You hold no claim over me."
"Kita, I am trying to protect you. Not date you. I have seen your disregard for other's hearts. I would not choose to trust you with mine."
His hand dropped, releasing me, and he swept out of the alley.