Highland Rebel: A Tale of a Rebellious Lady and a Traitorous Lord
by Judith James 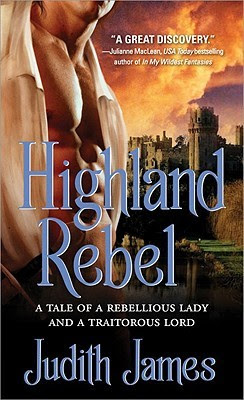 This is a Historical Romance.

Jamie Sinclair finds himself in a battle against the Highlanders. He has pledged his allegiance to the current King of England. He will change his religion or his support depending on who can help him maintain his fortune and his way of living.

After a battle, a highlander is captured. To his surprise, it turns out to be a female. He can't let the men at camp rape her and to his own dismay decides to protect the woman. He is told that in order to save her life (and maybe his own) he will need to marry her. He does this against the advice of the Priest.

The woman who is unknown to him is Catherine Drummond, the heiress to her clan. After the wedding is over, she is able to escape. When he discovers her missing, he follows her trail. When he catches up to her, her family tortures him and almost kills him. They don't know this is the Englishman Catherine has been forced to marry. She is able to save him and later on forces him to leave on a ship.

A year later, Catherine travels to London and finds Jamie. He teaches her how to disguise herself as a young lad and takes her to places she would not have been able to visit. Their passion continues to grow.

With another battle brewing, will Jamie switch sides again? Will they become enemies, fighting against each other? If London, Ireland or the Highlands are not safe, where will they go?

The author has done plenty of research to portray the distress of the era. To the point that sometimes it takes away from the romance between Jamie and Catherine. The constant escaping each other or leaving each other also becomes tiring.