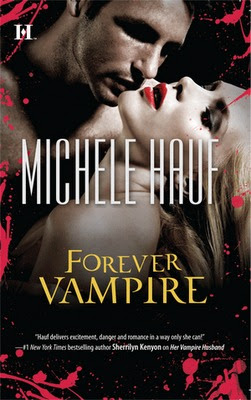 Lyric Santiago is a Vampire from the Santiago Clan. This clan is known for stealing and recently they have been close to bankruptcy. Her brother Leo has recently stolen a gown made by the Seelie Court. It was stored in a security safe by Hawkes Associates, a firm that represents the paranormal nations. Lyric is to turn over the gown to the Unseelie Prince, Zett . Her mother has arranged the exchange. Before this happens, Lyric and the gown disappear. Charish, Lyric's mother, believes she has been kidnapped and she hires Hawkes Associates to retrieve the gown and to find Lyric.

The company sends Vaillant the Unwanted to find her. He has been residing in Faery until three months ago when he was banned from it. Her uncle, Rhys Hawkes owns the company. His mother, Viviane LaMourette was tortured by his father, Constantine de Salignac. He buried her alive for two centuries under the city of Paris (this story is told in Seducing the Vampire). This made her insane. She was trapped while pregnant with Vail and his half brother Tryst, a werewolf. After being unfrozen she was able to deliver them.

Due to a prior pact with Cressida, mistress of Winter's Edge, Rhys had to give one of his sons to her. He believes Vail to be his own son and he sent him to Faery where he is raised. When Vail goes into the blood lust he is despised by the Fae. He learns to dislike vampires, despite him being one of them. He is also addicted to Faery dust but he won't admit it. He has not become a full vampire since he resists to drink blood instead he sustains on ichor.

Vail finds Lyric soon enough and he discovers she had escaped with the gown, faking a kidnapping. She is running from Zett, the Unseelie Prince who wants to kill her. Soon they discover they are attracted to each other but don't know if the prejudices against vampires or the addiction to fairy dust will let them become a couple.

There was a lot of action in this novel, I like how the story flows most of the time although some parts felt rushed. Unfortunately, I did not read Seducing the Vampire first so I felt lost at certain times. I liked Lyric's patience with Vail although some times I just wanted to shake him out of his addiction.

I also liked Tryst and Leo and I will like to read more about them.