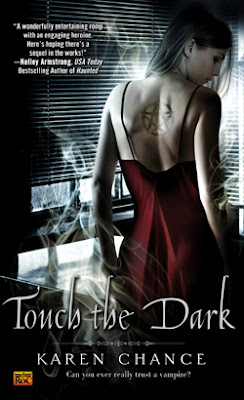 First book in the series.

Cassandra Palmer is a clairvoyant who is trying to survive the day.

She was brought up in the vampire world by Antonio. He is ruthless and runs his family as a mob. He is also responsible for the murder of her parents and using her power as a seer to his advantage. At fourteen she has a vision of this and runs away. Cassie returned to him in order to get revenge in the form of taxes. She escapes and has been in hiding for the last three years.

She gets an alert on her computer with her own obituary. She knows her time is up but she can't leave without telling her roommate Tomas to be careful. She goes to his work and they get attacked by vampires.

Turns out Tomas is a master vampire and has been sent by the Senate (made out of the most important vampires) to protect her. Rasputin is killing the senate members and they want her help.

She has the ability to communicate with ghosts, in particular with Billy Joe. He is able to draw energy from her. She can also possess a vampire, she can time travel first in Spirit and then as herself. She is the new Pythia, which Cassie has a hard time dealing with. But the power has chosen her instead of the apprentice.

During her childhood she had a governess she loved and well as Rafael (Rafe) a father figure. She had a crush on Mircea, Dracula's older brother. And now, that she is an adult it seems that his interest for her is much more than owning a seer.

Mircea is interested in protecting his brother, Radu, in the past. For this, he needs Cassie.

A War Mage, Pritkin is sent to evaluate her and if necessary destroy her. He tries several times without success. He is confused by her powers, her tolerance of vampires and her similarities with demon creatures. Pritkin is part of the Silver Circle.

This will be enough for Cassie to deal with but she learns that the Dark Circle is after her as well the rogue sybil, Myra.

I like the series, the heroine is smart and funny. The attraction to Mircea and Tomas is believable. This was a reread for me. I enjoyed it the first time around too.