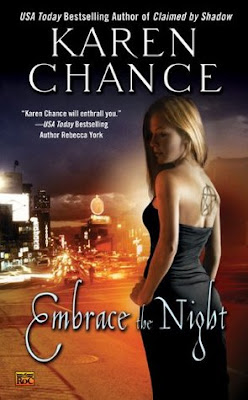 Cassie, is Pythia. She can time travel and her job is to protect the timeline. She has to be careful not to change the past which will affect the future. She already made a mess when she encounters Mircea in the past and doubles the geis on him. Because of it he is dying.

She meets with Rafe and he tells her the truth, she shifts to Mircea's bedroom where he drinks from her but lets her go.

She knows she needs to find the Codex Merlini to get the counter spell. She takes Mircea with her (the one from the present but before he gets sick). She learns in Paris who Pritkin really is and what he is.

Rosier, a demon is after her because she is looking for the Codex. He needs to get in line. The Silver Circle is after her and Pritkin. The Senate is after her. They have captured Tami, who has a son, Jesse, who can start fires. Tami was the person who helped her when she was a teenager. Her house was full of misfit kids. They all had powers.

In this installment we see more of Alphonse (Tony's second), his grilfriend Sal. Also, Saleh, a demon spirit and Apollo.

Cassie has to stop the geis and prevent her from becoming Mircea's servant or vice versa.

At the end, with Prtikin's help she is able to find a solution and breaks the geis.

The secondary characters make this book fun to read. The two love interest Mircea and Pritkin are both likable guys in very different ways. I don't know who I want as the HEA. Usually, I root for underdogs, but which one is it? I'll guess I'll side with Prtikin. I just want to touch his hair.