That Which Bites by Celis T. Rono 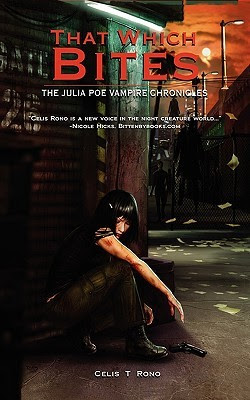 Julia Poe has been alone since the age of eight. Her family was murdered by vampires after the Grey Armageddon occurred, a poison that killed most humans. She has survived on the streets of Little Tokyo, hiding in a bunker. Her first kill happens at this age and she was left with a reminder for life, a scar on her face.

Fast forward to age twelve she meets a nun, sister Ann and "Goss" who showed her how to protect herself and kill vampires. She is a great shot and has learned combat from her friend Goss and the movies that she has watched to keep her company for so many years.

In this world a Vampire Council exists. Two master vampires have divided the city. QuillonTrent who has turned the beautiful people and cops and Kaleb Sainvire who has created the Human Cattle society. Humans are treated as cattle and their blood is the milk that gets distributed.

After one of the cattle rescues goes wrong, they decided to stay low for a month, they are to meet for a late birthday celebration for Poe. When her friends don't come back, Poe goes out looking for them. She gets captured and at the end saved by Kaleb who takes her to his home. There she learns that not all vampires are equal and there is a way to help the remaining humans.

This book is full of action, sometimes unnecessary violence. Julia gets hurt so many times, that you wonder how can she still be alive. She attacks Kaleb and his friend Jonathan without a second thought as to if she may be wrong about her conclusions. The end leaves you with a notion of a second book.