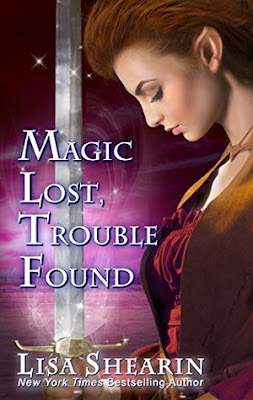 In the city of Mermeia, in the Kingdom of Brenir we found a royal family, the Mal'Salin with a new goblin King, Sathrik Mal'Salin and his exile brother, Chigaru Mal'Salin who is trying to steal the crown from the King.

In the middle of this power struggle, we find Raine Benares, a seeker, who can find objects or people. She is an elf, a sorceress of moderate powers. From her mother's side, the Benares family is known as smugglers or thieves, but her father's side remains a mystery for a while.

In one night, Raine becomes the center of attention when a friend of hers steals a necklace which turns out to be a beacon for the Saghred. An ancient object protected by the Conclave Guardians which can steal souls and has limitless power. Once Raine wears the necklace, she can't remove it without risking her life. Somehow she is linked to it and it gives her new powers and magnifies her own.

Sarak Nukpana is an evil goblin who is also the King's chief counselor shaman. He is after the Saghred and won't stop at nothing to be able to yield the power.

The elven Guardin, Mychael Eiliesor is sent to retrieve the beacon and hide it from evil. But, he finds himself wanting to protect the bearer of the necklace as well.

Raine's other love interest is a goblin by the name of Tam Nathrach, a nightclub owner but also a goblin once related to the royal family.

Magic Lost, Trouble found was an entertaining book. The secondary characters were well described. Phaelan and Piaras were my favorite. The action was enough to keep me reading. I will read the next one in her series.