Seducing the Defendant by Chantal Fernando 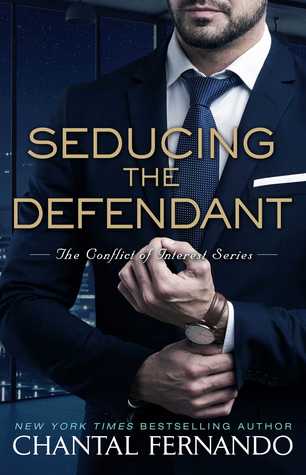 
Jaxon Bentley is a hardnosed criminal lawyer whose entire life revolves around his work. He’s been asked to represent Scarlett Reyes, a woman accused of murdering her police officer husband in cold blood. All the evidence points to Scarlett being guilty and Jaxon is sure it’s an open and shut case.


But when he meets his client, he can’t help but feel that she’s innocent and that there’s more to the story than meets the eye. With a bit of digging, he uncovers a connection to the notorious Wind Dragons Motorcycle Club and realizes that Scarlett’s case is a complicated and difficult one. It certainly doesn’t help that the two share an immediate and passionate attraction. Will Jaxon be able to prove Scarlett’s innocence or are the two doomed to fail both in court and as a couple?

This is book 2 in the Conflict of Interest series.

The main character Jaxon Bentley was introduced in the first book. We know he took some time off and he's back and ready to work. His next case involves a widow Scarlett Reyes who has been accused of murdering her husband, who was a cop. Jaxon doesn't know if the woman is telling the truth but he's good at his job and he likes to win.

After deeper investigation, he realizes Darren was not a good man. He not only was cheating on Scarlett but he was a dirty cop. He's sure Scarlett is innocent but proving it's another matter.

Scarlett came back from Europe when she was accused of killing Darren. She's still trying to find herself after being abused by her husband for many years. She wishes she could make plans for her future but not knowing if she's going to remain free or if she's going to prison makes her put the brakes on her decisions, including sexy lawyers who make her heart beat faster.

It was easy to like Jaxon since I knew him from the first book. He was smart, resourceful and his connection to Demon gave him a shade of grey. Jaxon was ready to do whatever it took to keep Scarlett safe. Also, he helped her find herself and he gave her enough breathing space for her to make her own decision and choices.

Scarlett deserved happiness after so much unfairness. It was great seeing her develop a backbone and open up to Jaxon and then creating new connections and friendships. Those friendships were all so different but in a way, they made sense.

The best part was being able to see the characters from the Wind Dragons Motorcycle Club series popping in. Demon in particular. He was amazing!

There's a twist I didn't see coming. It was intense. I can tell you, I didn't agree with the choice Chantal Fernando made. Why did she do it?

Overall, Seducing the Defendant was another good addition to the Conflict of Interest series.

A complimentary copy was provided by Gallery via Netgalley in exchange for an honest review.