Coming In Hot by Jennifer Bernard

Tobias has always been the strongest of Jupiter Point’s sexy Knight brothers, stubborn, intense…protective to the core. Which is why he rides to the rescue when he thinks an older woman has ensnared his starry-eyed baby brother. But one look at Carolyn Moore, and Tobias understands why a man might fall instantly under her spell. The art history teacher is every inch the “golden goddess” Aiden keeps raving about. Which makes Tobias’s own attraction to Caro incredibly inconvenient. Carolyn knows she looks the part of the calm, yoga-loving teacher. Beneath the Zen exterior, however, beats the heart of a warrior, trained during a past she’s worked hard to forget.

The uber-alpha Tobias may have had it wrong about his little brother, but it’s all Carolyn can do to resist the sexy temptation of the hyper-protective pilot and ex-soldier. She can’t risk a real relationship…especially now that the icy danger of her past is coming back to haunt her. Carolyn’s had plenty of time to learn how to handle her problems solo, but she’s never wrangled with a Knight brother determined to protect her like his own. This time, when trouble finds her, Tobias has her back—and he’s COMING IN HOT. 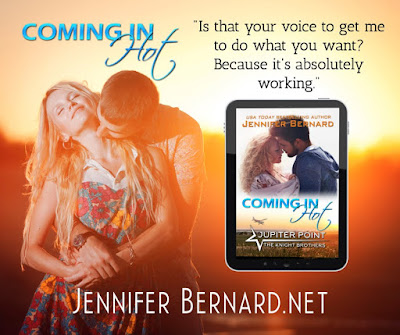 Carolyn went into the kitchen and pulled sandwich makings from the fridge. What kind of sandwich would a guy like Tobias Knight like? Something hearty, to maintain all those muscles. Roast beef, perhaps. Also, something that packed a punch. Horseradish. Horseradish was the testosterone of condiments. He'd probably like lots of that. Cheese? The guy didn't have an ounce of fat anywhere on him, at least that she could see.
That might require closer inspection, however.
Jarred by the thought, she accidentally squirted mustard onto the counter. As she was wiping it up with a paper towel, Tobias walked into the kitchen.
"All clean," he told her as he went to the sink to rinse off the cloth he was using. "Should be dry in a few minutes with this sunshine."
"Mmm-hmm." She tried hard not to watch the flexing of his muscles as he wrung out the cloth. What were those muscles at the back of the arm called? The ones that ran in a firm line between shoulder and elbow and made her mouth water? "What kind of sandwich would you like? I have roast beef, ham, cheese, I can make some tuna, whatever you like. Are you a peanut butter jelly man?"
He turned, grabbed a dish towel to dry his hands, and leaned his rear against the enamel of the farmhouse-style sink. "I'm easy. You learn not to be picky in the Army."
"Yes, but you're not in the Army anymore," she pointed out. "Now you can you eat whatever you want. That's what I do. Every single meal, I give serious and extensive thought to what I actually want to eat. So, what do you want?"
He stared at her, lips quirking up in a half-smile. "Really? Every single meal? What did you eat last night?"
"My favorite guilty secret snack. Ritz crackers, cheese, and pickles."
"I'll have that," he said promptly.
"That's not lunch. That won't hold you through painting the door."
He waved that off as he hung the dish towel back on its rod. "I could paint that door on no food. It won't take me long. The only question is how many coats we need to cover up that ugly orange."
She shuddered as she pictured it. This morning she'd sent an email to the math professor letting him know about the vandalism, though she hadn't included any details—like the fact that it was directed at her.
"Well, I'm sorry, but I'm not ready to share my guilty secret snack with you," she teased, half serious. "We barely just met."
"Guess you have a point there." He grinned at her. "So what do you want to know so you can decide if I'm worthy or not?"
"Let's start with what kind of sandwich you want."
"I told you, I'm easy. Anything you put together, I'll eat." He put his hand on his belly, hard and flat as a country highway.
"Roast beef and peanut butter? With bananas?"
"You're a lot meaner than you look, you know that?"
She gave him an evil grin. "Fine, I'll make you what I originally had in mind—roast beef and horseradish. No complaints."
"Sounds perfect. Can I help?"
"There's nothing much to do. Maybe grab some plates for us?"
She indicated the cabinet where the professor kept his dishes. He retrieved two plates, then examined them closely.  "I'll tell you one thing I am picky about—dishes," he explained. "I don't believe in automatic dishwashers. They don't do as good a job as a human being can. I got rid of the dishwasher at my brother's place. Do you mind?"
"Go for it." She rarely even used the dishes here. Her guilty pleasure snack didn't need them, and she usually ate on campus.
She finished making the sandwiches as he carefully washed the plates. She seared the image into her brain. A studly man doing her dishes and painting her door. This was fantasyland stuff.
She slid a roast beef sandwich toward him, then took a stool on the other side of the kitchen island. She felt a little safer with it between them.
He waited politely until she picked up her sandwich.
"Please." She waved him ahead. "You're a hard-working man, you must be hungry."
"I am. Thanks." Something in the way he looked at her as he said it made the hairs on her arm rise. He surveyed the sandwich, which she'd loaded up with extras—tomatoes, lettuce, cucumbers, mustard, mayo and horseradish. "When you make a sandwich, you don't mess around."
He bit into it, eyes half-closing as he consumed the layers of her masterpiece. It dawned on her that making food for someone, then watching them enjoy it, was a very sensual experience. She'd thought carefully about what to make for him, she'd spent time creating it, and now he was wrapping his mouth around it in obvious pleasure.
Oh boy. She was in deep, embarrassing trouble if she couldn't watch this man eat a sandwich without lusting over him. 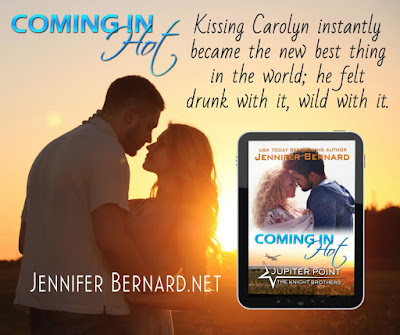 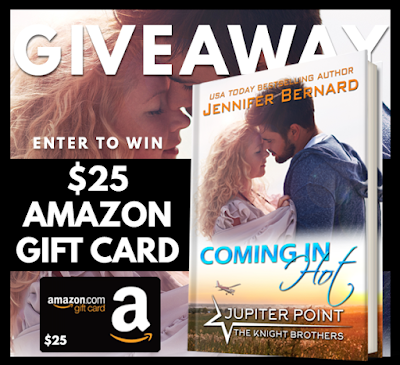