One of Us Is Lying by Karen M. McManus 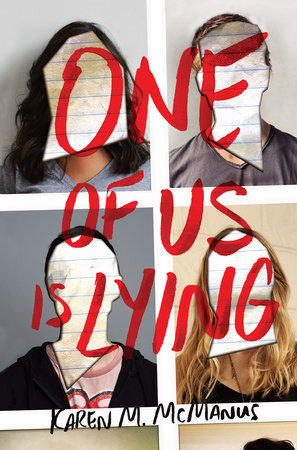 Title: One of Us Is Lying
Author: Karen M. McManus
Publisher: Delacorte Press
Release Date: May 30, 2017

The Breakfast Club meets Pretty Little Liars, One of Us Is Lying is the story of what happens when five strangers walk into detention and only four walk out alive. Everyone is a suspect, and everyone has something to hide.
Pay close attention and you might solve this.
On Monday afternoon, five students at Bayview High walk into detention.
Bronwyn, the brain, is Yale-bound and never breaks a rule.
Addy, the beauty, is the picture-perfect homecoming princess.
Nate, the criminal, is already on probation for dealing.
Cooper, the athlete, is the all-star baseball pitcher.
And Simon, the outcast, is the creator of Bayview High's notorious gossip app.
Only, Simon never makes it out of that classroom. Before the end of detention, Simon's dead. And according to investigators, his death wasn't an accident. On Monday, he died. But on Tuesday, he'd planned to post juicy reveals about all four of his high-profile classmates, which makes all four of them suspects in his murder. Or are they the perfect patsies for a killer who's still on the loose?
Everyone has secrets, right? What really matters is how far you would go to protect them."

“She's a princess and you're a jock," he says. He thrusts his chin toward Bronwyn, then at Nate. "And you're a brain. And you're a criminal. You're all walking teen-movie stereotypes.”

The description for One of Us is Lying is accurate. This novel reminded me so much of one of my favorite movies, The Breakfast Club. I haven't read nor watched Pretty Little Liars but now I know I want to.

The story begins when five kids are sent to detention but only four leave the room alive. There's Bronwyn, Addy, Nate, Cooper, and Simon.

Bronwyn is the good student. Her destiny is Yale. She's an overachiever.
Addy is the homecoming princess who's dating the perfect guy.
Cooper is the star athlete. The one being scouted by the major leagues.
Nate, the drug dealer who's on probation already.
Last, there's Simon who's a threat to everyone because he's the mastermind behind the gossip app who has destroyed several lives at Bayview High.

When Simon dies, the rest of the kids are the main suspects.

Is one of them lying? Did they plan it together? Or is it one of them the culprit? Worse, is someone else framing them?

These are all valid questions which Karen M. McManus does a beautiful job at disentangling them.

I was hooked from the first chapter. Surprisingly, I ended up liking all the suspects but my favorite one was....you know it...bad boy Nate.

Nate has been given a bad deal. He comes from a broken home with an alcoholic father and a no-present mother. He has raised himself and he made the wrong decisions to pay the bills. He's in trouble with the law already. His future as a suspect looks grim.

Bronwyn was my second favorite. She's smart and protective of her younger sister. Her character grows as I was turning the pages. Her loyalty and dedication towards another character won me over.

Addy's life crumbles in front of her eyes when Simon's death affects her perfect relationship. She looks for solace in her family, specifically her older sister who supports her no questions asked. I was glad she had her. Addy's was the character that grew the most and who developed a backbone when she needed it the most.

I was not sure what to think about Cooper at first. I thought he was shallow but I soon realized he was the one under the most pressure. He was hiding things that if known, could affect the rest of his life. Even when his future is threatened, he has time to do small things in support of the other suspects.

One of Us is Lying played in my head just like a movie. It had the perfect combination of suspense, intrigue and captivating characters.  The plot, as well as the dialogue, was well developed and entertaining.

I won't hesitate to read another book by Karen M. McManus.

“Unless one of us is lying. Which is always a possibility.”