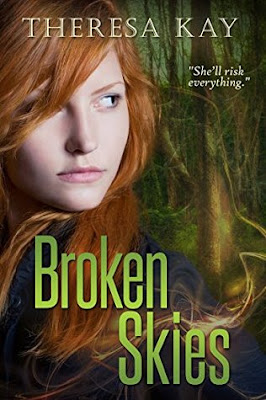 Plagued by nightmares and panic attacks, seventeen-year-old Jax Mitchell wants nothing more than a life of seclusion with only her twin brother for company. So when he's kidnapped by Earth's reclusive alien settlers, the E'rikon, she'll do anything to get him back—even form an alliance with a teenage E'rikon boy left behind by the same ship that took her brother.

Jax agrees to act as a guide, and in return, the alien agrees to sneak her past the human-proof barrier surrounding the E'rikon city. Too bad it's not that simple. Jax soon finds that she's drawn to the alien boy with bright green hair and jewel-like scales on his back—and he's equally affected by her, the courageous redhead with haunted eyes. But she doesn't know the alien's true motives, and he has no idea that she is much more than she seems.

With the aliens and the humans at odds, the connection forming between the two teens has consequences. What started off as a rescue mission sets in motion a chain of events that threatens not only the remaining humans and the growing alien society but Earth itself.

“I think this is the first time I have seen you speechless," Lir says with laughing eyes. "Had I only known, I would have removed my shirt sooner.”

I have had this book for a couple of years now. One of my friends loved it and it was time for me to read it. It is no mystery that I love the Lux series which I think are the only books I've read with aliens in it.  I have enjoyed alien movies a lot. Starman, E.T, Close Encounter of the Third Kind, MIB, Independence Day, Contact and Signs to name a few.

Broken Skies is about Jax Mitchell, a teenager who's living in a dystopian world. Decades ago, ninety percent of the world died during a war. After the war, aliens move in. They are named the E'rikon. Until now, humans have ignored the aliens and vice-versa.  Jax lives with her brother in a small settlement. Jace, her brother has adapted well to living within. Jax wants nothing but to leave it and take Jace with her. When she was ready to tell him about the plan, Jace is taken by a group of aliens. Jax will do anything to get him back including partnering with an E'rikon named Lir.

Jax doesn't know why Lir was close to their settlement but she knows he's the only one who knows how to get her inside their protected Alien city.

The premise of Broken Skies was interesting. I like both main characters. Jax was a strong-willed young woman. She was a survivor despite having PTSD.  She was also loyal to her brother. She knew the danger but she never gave up trying to rescue Jace.

Lir was mysterious. He could also be funny and sweet. He was hiding things from Jax but neither trusted each other completely.

Two things bothered me. The first one had to do with Jax. Three consecutive scenes had her vomiting. If she vomited so much, how did she have the strength to keep on going without food in her stomach? and Lir, being at a complete loss during the travel through the forest. I don't know I was hoping he was more useful.

Overall, Broken Skies was entertaining, fast-paced and had good world building. I do want to continue reading the other two books.