Between Sisters by Kristin Hannah 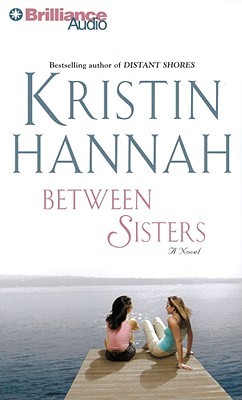 Meghann Dontess is a woman haunted by heartbreak. Twenty-seven years ago she was forced to make a terrible choice, one that cost her everything, including the love of her sister, Claire. Now, Meghann is a hotshot divorce attorney who doesn’t believe in intimacy - until she meets the one man who can change her mind.


Claire Cavenaugh has fallen in love for the first time in her life. As her wedding day approaches, she prepares to face her harsh, judgmental older sister. It is the first time they have been together in more than two decades. Over the course of a hot Pacific Northwest summer, these two women who believe they have nothing in common will try to become what they never were: a family.


Tender, funny, bittersweet, and wonderfully moving, Between Sisters celebrates the joys and heartaches that can be shared only by sisters, the mistakes made in the name of love, and the healing power of new beginnings - all beautifully told by acclaimed author Kristin Hannah.

“If love is the answer, could you please rephrase the question?”

Another great novel by Kristin Hannah!

Between Sisters had a blend of romance, despair, and hope impacting a very dysfunctional family.

Two sisters have been estranged for decades. Meghann Dontess and Claire Cavenaugh grew up together until events in their lives separated them.

Meghann the oldest, took care of Claire when their mother was more interested in dating and later on acting than taking care of the baby. Meghann did everything for Claire but in the present, they don't even talk much to each other. The occasional phone calls always seem to be forced.

Meghann is a successful divorce attorney. Her firm is sought by many. Her plate at work is always full without time for anything else. When she needs company, she just takes a younger man to bed from a bar she frequents and that's that. Meghann realizes she has issues. She has been undergoing therapy for years but she tries never to share things that are too personal with Harriet, her therapist. She prefers to joke about it than to admit she's lonely.

Claire Cavenaugh is a single mother. She works hard at her father's resort. She came to live with Sam, her father when she was just a little girl. She has good friends she can trust and she's happy with her life. The one thing missing is the love of a man. Someone to hold her and share her the rest of her life.

Shortly, both women will have a chance at happiness and a chance to connect with each other again.

“They were always doing that to each other, misinterpreting, imagining the worst. No wonder every conversation bruised one or the other.”

It's hard to stop reading a book by Kristin Hannah. Once you start it, the world she creates keeps you trapped. Between Sisters is not an exception.

I liked both main characters. Meghann with her blunt and straightforward personality. Claire with her content and happy attitude. From the beginning, I was rooting for them to bury the hatchet and forgive each other. In a way, they reminded me of Kate and Tully from Firefly Lane.  As with such book, it's probably a good idea to have some tissues close by.