Thirteen (Women of the Otherworld #13) by Kelley Armstrong 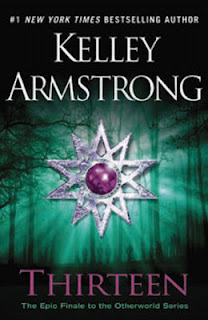 Last Book in the Series


Let me start by saying that I am very sad this series has ended.
This final book starts where the last one ended. Savannah Levine, Adam and Bryce have escaped the lab and the explosion. The police are everywhere and Savannah leaves with Jaime. Unfortunately, the police take them to the station since Savannah's description has been implicated in the explosion. At the station, someone has liberated an evil being and there is a hungry werewolf too. The girls have to escape. But they get help from an unexpected character.

Savannah also has to try to stop the supernaturals from revealing themselves to the world. The whole crowd gets involved, including Eve, Paige, Lucas, Cassandra, Jaime, Jeremy, Clay and Elena. During this crazy-running out of time-action, we have Adam and Savannah's relationship developing.


I would have preferred for the series to end from Elena's POV, after all she was the first Women of the Otherworld. And also because Clay is my favorite character.
3.5/5 Fangs


Mom leaned over the table. “Gotta admit, as good as Clayton Danvers looks from the other side, he looks even better in person.” She paused. “Just don’t tell Elena I said that.” Another pause. “Or your father.”
I smiled. “Nothing wrong with window shopping when you aren’t looking to buy. Elena’s used to it. Clay’s the one you don’t want noticing you checking him out. He does not take that well. Just ask Cassandra.”
Mom made a face. “Vampires.”
Clay and Elena walked in. Both are blond with blue eyes.  Both were dressed in jeans, sneakers, and T-shirts, none of it less than five years old. It didn’t matter. They still looked like they stepped out of a magazine spread for Outdoor Living, fresh-scrubbed, athletic, and attractive. Both were on the far side of forty, but blessed with a werewolf’s slow aging and fast metabolism.
I stood and waved. Clay noticed first. He gave me a blank look. When I smiled and beckoned him over, he scowled and looked away and I had a moment of consternation before I remembered we were still in disguise.
Across the table, Mom chuckled. “You’re so right. There’s a man who does not appreciate attention, even from cute girls.”
Elena looked over at us, and after only a moment’s pause, smiled and whispered to Clay. His scowl vanished. I moved over beside Mom and let them take the booth seat across from us.
“Good disguises,” Elena said.

Email ThisBlogThis!Share to TwitterShare to FacebookShare to Pinterest
Labels: Kelley Armstrong, Thirteen, Women of the Otherworld