Married by Mistake by Abby Gaines 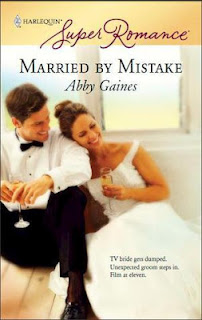 Casey Greene is ready to be married. She has tricked her fiancee into going to a live show to be married. But, before the show starts she has moment of panic and almost flees the premises. Instead she meets Adam Carmichael, who is the owner. He becomes interested in her but convinces her to go back to the show. She goes back but when her fiancee learns the truth and runs on live tv, she is devastated. Adam steps in thinking that they can have a fake wedding. To their utter surprise they are legally married. They will live together until the annulment can be obtained.
Living together becomes natural to both and they learn much about each other. They give into the attraction. But, how can they stay together when they have different interests?
A unbelievable story that works because it is Harlequin.
3/5 Fangs
Posted by MrsLeif at 2:56 PM