The Shadow by Melanie Raabe 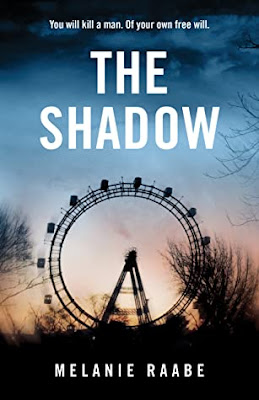 Ruth Ware meets Shari Lapena in this internationally bestselling psychological thriller about the inescapable pull of destiny and revenge.
Norah Richter has recently moved from Berlin to Vienna, hoping to put her old life behind her. While walking to her new office one morning, Norah is approached by an elderly homeless woman who utters these chilling words:
On the eleventh of February, you will kill a man called Arthur Grimm . . . With good reason. And of your own free will.
Norah is unnerved — many years earlier, something terrible happened to her on February 11 — but she chooses to shrug off the encounter as mere coincidence, until a few days later when she meets a man named Arthur Grimm.
Soon Norah begins to have a dreadful suspicion: Does she have a good reason to hate this man she’s never met? Could he be responsible for the tragic event in her past? And can Norah make sure that justice is done without committing murder?

On the eleventh of February, you will kill a man called Arthur Grimm . . . With good reason. And of your own free will.

Well, that certainly is enough to wake up Norah!  Who needs espresso when a fortune teller is telling you are going to commit murder on a certain date?
Norah Richter is starting over. She is a journalist and due to a piece she wrote, she has lost her job, her relationship and now she is ready to reinvent herself. She moves from Berlin to Vienna and starts a new job which she is happy to take on until a homeless woman approaches her and speaks those chilling words.
Norah's greatest fear is to kill someone so she is sure nothing will happen on February 11th since there is no way she will do what she is told. Although, February 11th does have a meaning for her. She lost someone dear to her on that day. But how does Arthur Grimm connects with any of it?
Quite an interesting story! Norah was in pain and dealing with a lot. However, I was upset she was getting all these signs but instead of carefully examining them, she was drinking, smoking and sleeping around too much. Her saving grace was her trusty friends who were there for her despite it all.
Every time, Norah described her surroundings, I was transported back to Vienna. I could feel the chill in the air and the threatening darkness.
Kudos to the author and to the audio performer for the atmospheric surroundings.
Cliffhanger: No
4/5 Fangs
A complimentary copy was provided by Spiderline via Netgalley in exchange for an honest review.
Posted by MrsLeif at 7:53 PM