The Chestnut Man by Søren Sveistrup 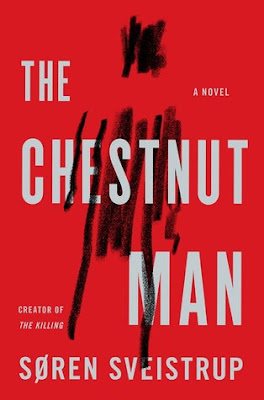 The heart-pounding debut from the creator of the hit Scandinavian television show: The Killing.
If you find one, he’s already found you.
A psychopath is terrorizing Copenhagen.
His calling card is a “chestnut man”—a handmade doll made of matchsticks and two chestnuts—which he leaves at each bloody crime scene. Examining the dolls, forensics makes a shocking discovery—a fingerprint belonging to a young girl, a government minister’s daughter who had been kidnapped and murdered a year ago.
A tragic coincidence—or something more twisted?
To save innocent lives, a pair of detectives must put aside their differences to piece together the Chestnut Man’s gruesome clues.
Because it’s clear that the madman is on a mission that is far from over.
And no one is safe.

The Chestnut Man was an atmospheric thriller with the right amount of suspense.
A murder has been committed and detective Thullin and Hess are the ones investigating it.
Thullin is a single mother and a very good detective. She has done the time in the department she is in but she's ready for an upgrade and recently has applied to the cyberunit.
Hess has been working with Europol solving cases. He's a nomad and doesn't really put any roots anywhere. He recently got in hot water during his last investigation and he was sent to Copenhagen as a form of punishment. At first, nothing is really interesting to him until the dead woman is found. He becomes even more invested when the fingerprint of an abducted twelve-year-old is found at the scene of the crime. The killer has left his calling card, a chestnut man and her prints are on it.
The twelve-year-old is presumed dead. Someone confessed to raping and murdering her over a year ago, so how can her fingerprint be there?
That's the million-dollar question.
There is one undeniable fact about the gruesome murders, the women who have been targeted have all failed their children in one way or the other. There has to be a connection but what is it?
The audio (which I did parts of it) was excellent. I felt like I was there, experiencing the cold dark days. I liked both detectives and I wanted to learn more about them. I do think that they needed to interact a lot more than they did.
I would love for this to become a series. I want more Hess and Thullin's cases.
Cliffhanger: No
4/5 Fangs
Posted by MrsLeif at 3:21 PM