This Time Next Year by Sophie Cousens 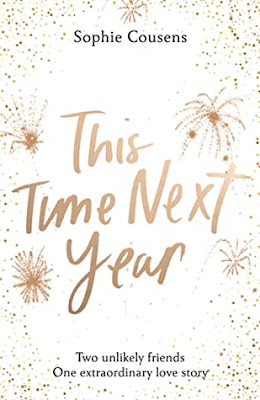 In this warm-hearted love story for fans of One Day in December, a man and woman who were born at the same hospital on New Year’s Day meet on their thirtieth birthday and discover the many times their paths almost crossed before.
Down-to-earth baker Minnie Cooper knows two things with great certainty: that her New Year’s birthday has always been unlucky, and that it’s all because of Quinn Hamilton, a man she’s never met. Minnie and Quinn were born at the same hospital just after midnight on New Year’s Day thirty years before, and not only did he edge her out by mere minutes to win the cash prize for being the first baby born in London in 1990, but he stole the name she was meant to have, as well. With luck like that, it’s no wonder each of her birthdays has been more of a disaster than the one before.
When Minnie unexpectedly runs into Quinn at a New Year’s party on their mutual thirtieth birthday, she sees only more evidence that fortune has continued to favor him. The handsome, charming business owner truly seems to have it all–including the perfect girlfriend. But if Quinn and Minnie are from different worlds, why do they keep bumping into each other? And why is it that each frustrating interaction somehow seems to leave them both hoping for more?

The story was a good one. Two souls that were connected since birth and they finally met at the age of thirty, during their birthday, on New Year's Day.
Or do they already know each other?
Minnie Copper (no joke that's her name) believes her birthday is jinxed. She was born a minute too late on New Year's Day to become the first 90's baby. She lost the cash prize as a newborn. She also lost her name. Her mother wanted to name her Quinn but while ready to deliver Minnie, she was placed in a room with another pregnant woman who was ready to have her own baby. Said baby is born first and is named Quinn.
For years, Minnie has believed Quinn Hamilton stole her luck. Awful things happen on her birthday and she tries to have a low-key birthday. This year, her boyfriend Greg has decided to take her to a party. By the time they get there, someone had already vomited on Minnie. She excuses herself to go clean up when she becomes stuck in the bathroom. The next morning, someone opens the door, and it's none other than Quinn Hamilton, the name stealer.
This one chance meeting will change the next twelve months for them. A friendship develops and then a romance but can Minnie overcome her fears and can Quinn stop running away from commitment?
This Time Next Year was a winner for me. I'm one of the few people who didn't enjoy One Day in December so I was a little worried about the comparison. Thankfully, I loved how the story developed and how the romance evolved. The near misses since they were born were all so good! I was desperate for them to realize they knew each other.
It was really a great buddy-read with Susan and Kim.  Thank you ladies.
Cliffhanger: No
4/5 Fangs
Posted by MrsLeif at 3:00 PM