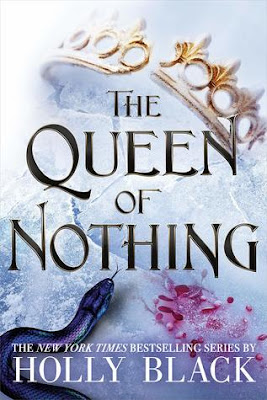 He will be destruction of the crown and the ruination of the throne.
Power is much easier to acquire than it is to hold onto. Jude learned this lesson when she released her control over the wicked king, Cardan, in exchange for immeasurable power.
Now as the exiled mortal Queen of Faerie, Jude is powerless and left reeling from Cardan’s betrayal. She bides her time determined to reclaim everything he took from her. Opportunity arrives in the form of her deceptive twin sister, Taryn, whose mortal life is in peril.
Jude must risk venturing back into the treacherous Faerie Court, and confront her lingering feelings for Cardan, if she wishes to save her sister. But Elfhame is not as she left it. War is brewing. As Jude slips deep within enemy lines she becomes ensnared in the conflict’s bloody politics.
And, when a dormant yet powerful curse is unleashed, panic spreads throughout the land, forcing her to choose between her ambition and her humanity…
From the #1 New York Times bestselling author Holly Black, comes the highly anticipated and jaw-dropping finale to The Folk of the Air trilogy.

And that is how you should finish a trilogy! Well done Holly Black!
So I got way invested in this series. The Cruel Prince was a good beginning, The Wicked King so much more interesting (with a WTH ending), and then we get The Queen of Nothing which was everything I wanted it to be.
Jude's schemings were the best. She could forge a plan in her head even better than her father and that is saying a lot.
At the end of The Wicked King, Jude is exiled but when Taryn needs help, Jude agrees to go back as Taryn to help her get out of her ordeal. To be honest, her "ordeal" really surprised me. I wasn't expecting it but I'm guessing the author has her reasons for doing it.
What did I love about the Queen of Nothing?
*Sisters. When push comes to shove, the sisters were together, fighting together.
*Cardan. What he tells Jude when she is finally back. Sigh!
*Vivi in every scene.
*Jude and Cardan finally telling each other the truth.
The best was seeing the change in Jude. She had a tough choice ahead of her and her humanity and her ambition were doing their own battle of sorts.
I know Taryn has to come next. There is no way the author implies certain things without giving us more of this world.
Cliffhanger: No
4.5/5 Fangs
Posted by MrsLeif at 9:32 PM