Heart of a Runaway Girl by Trevor Wiltzen
Mabel Davison #1 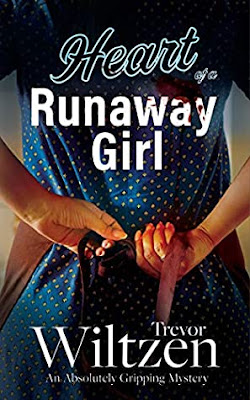 An original, captivating mystery series debuts
In a 1980s mountain town fueled by the drug trade, a young couple gets into an argument at Mabel's Diner. Then the teen girl winds up brutally murdered, and the black boyfriend automatically jailed. Haunted by the tragedy, big-hearted, big-haired, single mom and waitress, Mabel Davison steps in and asks questions few want answered. But she's unprepared for the secrets she uncovers, and now more lives may be destroyed, including her own.
Get your small-town mystery with a twist today!

When a young woman is found murdered, Mabel Davison is touched by her death. She had met the girl the day before at her dinner and knew she needed help. Her black boyfriend, Winston is taken into custody and charged with the crime. Yet, Mabel doesn’t believe Winston did it. She knows someone else is the responsible party and she will do anything to prove it.
Larson, the town's drug lord, and his skinhead's cronies are terrorizing the town and when Winston was taken into custody, his men have tried to kill him. Mabel helps the Sheriff protect Winston but now Larson knows her name and is paying attention. Mabel is tired of Larson getting away with everything while providing drugs to the town. Someone has to stop him.
In order to help Winton prove his innocence, Mabel begins her own investigation to find the murderer but Larson doesn’t want her asking certain questions. Can she help Winton without putting her family and herself in danger?
I like Mabel. She was straightforward. She cared about her family and her town. She was always trying to help others and she didn’t hesitate to help Winston despite attracting Larson's interest.
Larson's character was easy to hate. He was pure evil and I was worried he was going to hurt her. I’m sure Mabel has not seen the last of him.
Cliffhanger: No
3/5 Fangs
A complimentary copy was provided by IBPA via Netgalley in exchange for an honest review.
Posted by MrsLeif at 7:51 PM