A Caller's Game by J.D. Barker 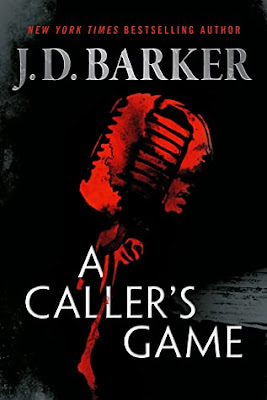 DIE HARD meets TALK RADIO in this heart-pounding, relentlessly fast-paced thriller from the New York Times bestselling author of The Fourth Monkey—master of suspense, J.D. Barker.
“I’m going to offer you a choice.”
Controversial satellite radio talk show host, Jordan Briggs, has clawed her way to the top of the broadcast world. She doesn’t hold back, doesn’t spare feelings, and has no trouble sharing what’s on her mind. Her rigorous pursuit of success has come at a price, though. Her marriage is in ruins, she hasn’t spoken to her mother in years, and she’s distanced herself from all those close to her. If not for her young daughter, Charlotte, her personal life would be in complete shambles.
When a subdued man calls into the show and asks to play a game, she sees it as nothing more than a way to kick-start the morning, breathe life into the beginnings of drive-time for her listeners. Against her producer’s advice, she agrees, and unwittingly opens a door to the past.
Live on the air with an audience of millions, what starts out as a game quickly turns deadly—events long thought buried resurface and Jordan Briggs is forced to reconcile with one simple fact—All decisions have consequences.

Well that showed me! I should have read the synopsis.
The description is perfectly accurate. Talk Radio show meets Die Hard.
As a Die Hard fan (watched it again this past Christmas) seeing Bruce Willis, sorry meant detective Cole Hundley having a very bad day was entertaining.
It all starts with a radio show persona, Jordan Briggs. Over the years, Jordan has accumulated quite a few steady amount of followers. She has about 5 million listeners but she’s always happy to increase her show's ratings by asking the tough questions.
The morning the book begins, Jordan is running late for work. She's late because of traffic and because she decided to drive her car in NYC (who does that?). Anyway, as soon as she gets to her building her show has started. She's in the zone, when a caller by the name of Bernie asks her to play a game with him. What happens next is a bomb. Literally not figuratively.
Officer, Cole Hundley is not having a great morning either. He has been punished by his superior and has been placed on traffic duty. When he sees Jordan committing an illegal stop, he decides to pursue her. He has no clue what this action is going to cost him.
I guess I could divide this book into two halves. The first half is more about intrigue. The second half is ALL action with explosion after explosion.
A Caller's Game could be a very successful movie. I'd watch it. It would be even funnier if Bruce Willis played one of the characters. Just saying.
I’m a big fan of J. D. Barker's 4MK thriller series. I thought the plot was excellent. In this one, I thought some parts were too unbelievable but I guess Die Hard was too 🤣.
I decided to forget how hard it will be for Vernie to plan and implement everything he did. I just went with it and I had fun.
I think most action lovers will love it.
Cliffhanger: No
4/5 Fangs
A complimentary copy was provided by Hampton Creek Press via Netgalley in exchange for an honest review.
Posted by MrsLeif at 3:07 PM