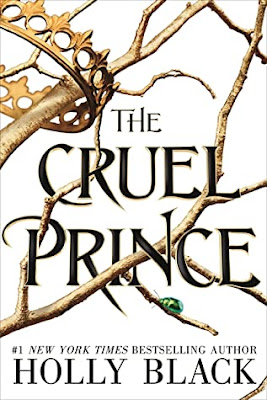 Of course, I want to be like them. They’re beautiful as blades forged in some divine fire. They will live forever.
And Cardan is even more beautiful than the rest. I hate him more than all the others. I hate him so much that sometimes when I look at him, I can hardly breathe.
Jude was seven when her parents were murdered and she and her two sisters were stolen away to live in the treacherous High Court of Faerie. Ten years later, Jude wants nothing more than to belong there, despite her mortality. But many of the fey despise humans. Especially Prince Cardan, the youngest and wickedest son of the High King.
To win a place at the Court, she must defy him–and face the consequences.
As Jude becomes more deeply embroiled in palace intrigues and deceptions, she discovers her own capacity for trickery and bloodshed. But as betrayal threatens to drown the Courts of Faerie in violence, Jude will need to risk her life in a dangerous alliance to save her sisters, and Faerie itself.

I kept on seeing this book on my TBR and I thought it was time to read a fantasy in between my thrillers. It was a good choice.
The Cruel Prince was an interesting first book in the Folk of the Air series.
Jude is a mortal. When she was seven, Madoc, the High King's general shows up at her front door and kills her parents. Then, she and her sisters are taken to the High Court of Faerie. It turns out that Madoc is Jude's sister Vivienne's real father. As time passes, Jude and Taryn (Jude's twin) start getting used to Faerie while Vivi wants to go back to the mortal world.
Jude dreams of becoming a knight and fighting and defending the king. She seeks Madoc's approval and she tries to best the other Folk her age. Especially, she wants to best Cardan, the sixth-born to the High King Eldred. Cardan enjoys being cruel and he never misses a chance to tell Jude she is a mortal and not worthy.
As Jude's plans change, her destiny becomes something different.
~~
I had some issues with the main story.  A mortal girl against all the fae was a hard pill to swallow. Yes, she was trained since she was taken to faerie and she was able to lie and be cunning but I just couldn’t get out of my head how young she was and how unprepared to become a spy she was.
Leaving that aside, I did like the story. I liked how what I thought at the beginning was not the same as when the book ended. Meaning I hated Cardan less and Locke started making me want to kill him with my bare hands.
One of the best things about the book was the dichotomy of Jude's feelings towards Madoc. I could understand how upsetting it was to feel that Madoc was like a father to her when he was actually the reason she didn’t have her real father anymore.
I would definitely read the next one.