The Last Thing He Told Me by Laura Dave 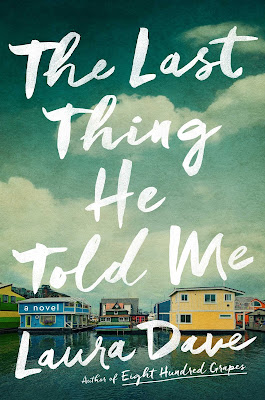 We all have stories we never tell.
Before Owen Michaels disappears, he manages to smuggle a note to his beloved wife of one year: Protect her.
Despite her confusion and fear, Hannah Hall knows exactly to whom the note refers: Owen’s sixteen-year-old daughter, Bailey. Bailey, who lost her mother tragically as a child. Bailey, who wants absolutely nothing to do with her new stepmother.
As Hannah’s increasingly desperate calls to Owen go unanswered; as the FBI arrests Owen’s boss; as a US Marshal and FBI agents arrive at her Sausalito home unannounced, Hannah quickly realizes her husband isn’t who he said he was. And that Bailey just may hold the key to figuring out Owen’s true identity—and why he really disappeared.
Hannah and Bailey set out to discover the truth, together. But as they start putting together the pieces of Owen’s past, they soon realize they are also building a new future. One neither Hannah nor Bailey could have anticipated.

A terrible thing has happened to Hannah. Her husband of just over a year, Owen, has run away leaving behind a note that says "Protect Her".
Owen's boss has been accused by the SEC of fraud and he has been taken by the police. Hannah has been left with her stepdaughter, Bailey, who has never warmed up to Hannah despite multiple attempts to engage her.
Hannah can't relate to her new situation. The husband she knows would never leave her or his daughter behind. Something is terribly wrong. Hannah doesn't know much about his past but she knows Owen was married before. His first wife died in an accident and he became a widower with a small baby. Now, Bailey is sixteen and giving her a hard time.
A day after his disappearance, a US Marshal stops by her home and tells her, Owen is not the man she thinks he is. Later on, the FBI comes knocking on her door wanting to know where Owen is and how much he knew about what his boss was doing. This pushes Hannah to begin her own investigation and embark on a journey to learn who her husband really is. What she discovers is a trail of lies and deceit.
The Last Thing He Told Me was well-written and quite addicting. The pages flew by. I liked Hannah almost instantly. She was trying hard to help Bailey and was ready to do everything to protect her and find the answers they needed.
I wasn't happy with the resolution but other than that, I thought the story was a good one.
Cliffhanger: No
3.5/5 Fangs
A complimentary copy was provided by Simon & Schuster via Netgalley in exchange for an honest review.
Posted by MrsLeif at 3:04 PM