The Night Market by Jonathan Moore 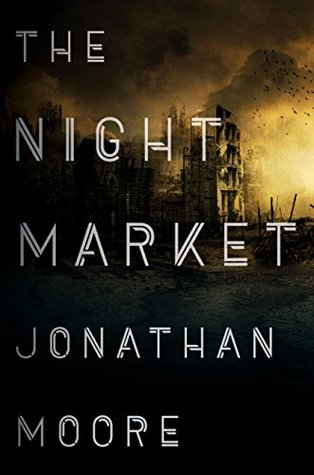 From an author who consistently gives us “suspense that never stops” (James Patterson), a near-future thriller that makes your most paranoid fantasies seem like child’s play.

It’s late Thursday night, and Inspector Ross Carver is at a crime scene in one of the city’s last luxury homes. The dead man on the floor is covered by an unknown substance that’s eating through his skin. Before Carver can identify it, six FBI agents burst in and remove him from the premises. He's pushed into a disinfectant trailer, forced to drink a liquid that sends him into seizures, and is shocked unconscious. On Sunday he wakes in his bed to find his neighbor, Mia—who he’s barely ever spoken to—reading aloud to him. He can’t remember the crime scene or how he got home; he has no idea two days have passed. Mia says she saw him being carried into their building by plainclothes police officers, who told her he’d been poisoned. Carver doesn’t really know this woman and has no way of disproving her, but his gut says to keep her close.

A mind-bending, masterfully plotted thriller—written in Moore's "lush, intoxicating style" (Justin Cronin)—that will captivate fans of Blake Crouch, China Miéville, and Lauren Beukes, The Night Market follows Carver as he works to find out what happened to him, soon realizing he's entangled in a web of conspiracy that spans the nation. And that Mia may know a lot more than she lets on.

"These days you don't know if a bird's a bird."

Sad to say this novel was not for me.  It’s a futuristic dystopian thriller with a small romantic component.

I did like the idea of the novel. Imagine, a near future where your memories are erased....Let's back up a little. Inspector Ross Carver and his partner, Jenner are called to the scene of a death. When they get there, two policemen are waiting for them. To their amazement, the body of the victim is undergoing autodegradation. Bones are disappearing in front of their eyes. Just then, the FBI (or so they say) walk into the room and take them to a decontamination trailer. Next thing they know, they are given something and when Ross Carver wakes up in his own bed at his apartment, he can't remember anything from the last three days and to his surprise, his neighbor Mia is reading to him.

Ross knows something is very wrong and when Jenner admits he's having problems with his memory too and they are surrounded by a funny smell, they are both determined to discover what was done to them. But, who can they trust? Is Mia hiding information from them? Who's the mastermind? And is the world going mad?

Like I said earlier, the premise was a good one but I failed to enjoy The Night Market. It might be this reader's fault for not realizing this was a futuristic suspense novel and I can't say that I have read this genre before. I felt the prose dragged in certain parts and I didn't buy the Mia-Ross interaction.

Thank you, NetGalley and Houghton Mifflin Harcourt for the chance to read The Night Market.