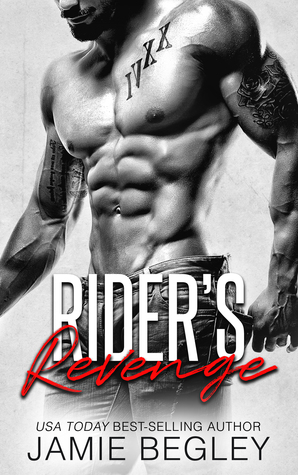 Revenge is a seven-letter word that isn’t for the faint of heart. It’s a word for those who have been wronged.

Jo Turner has been waiting five, long years to finally turn revenge into vengeance. Using Rider, the pretty-faced manwhore, is simply the price she is willing to pay to satiate her desire for revenge. Little does she know, she makes herself a target from the one thing Rider has sworn to give his life to protect—The Last Riders.

When you wake the soldier, be prepared for the consequences.
Rider is going to teach her a hard lesson: revenge is a double-edged sword … and it always cuts both ways.

"I'd have to be a little nutty to love you."

I can't believe it but I'm so disappointed. I was expecting Rider's book to be as good as Cash's book. Such a letdown!

There are so many things I was unhappy with. But the most important as a romance lover was that the romance felt completely flat to me. There is no great gesture, groveling, or even a clear declaration of love from Rider to Jo which I could believe.

If you are a fan of this series like I am, you know these guys aren't into monogamy until they meet their one true love (for the most part). I was so excited about Rider finally meeting his match. Someone who can bring him down a peg and make him fight for her love. What I got, was a doormat of a heroine who let him do whatever he wanted. The synopsis says this book is about her revenge but halfway through the book, she gives up.

Saying that I still like some parts of the book. The banter between Jo and Rider, the "shadiness" from Shade who enjoys manipulating his buddies,  Jo discussing who she wants her other Last Rider to be, Lily discussing her love of cowboys, Killyama in every scene.  The epilogues were also all great. The last one, of course, bittersweet, just like Shade's book was for me. I won't lie. I teared up while reading it. Regardless of the good parts, they were not enough to save this book as a whole for this reader.

Anyway, I'm still invested in this series and I'll read the next book. I hope it is Gavin's turn. The guy deserves a great woman.