Today we are celebrating the release of FATAL CHAOS, a romantic thriller title that is part of the Fatal series by Marie Force. Teasers for the book, and the purchase links, can be found below.

The 12th romantic thriller title in the Fatal Series.


“With intrigue, mystery, action, a touch of humor and a hot romance, this story has it all.” —4 Stars from RT Book Reviews for Fatal Chaos

First the calm. Then the storm…

Escaping DC during the dog days of summer is one of the smartest moves Washington metro police lieutenant Samantha Holland ever made. Beach walks aren’t quite as romantic with the Secret Service in tow, but Sam and her husband, Vice President Nick Cappuano, cherish the chance to recharge and reconnect—especially with a scandal swirling around the administration. No sooner are they back home than a fatal drive-by shooting sets the city on edge. The teenage victim is barely older than Sam and Nick’s son, Scotty. As more deaths follow, Sam and her team play beat the clock to stop the ruthless killers. With Nick facing his greatest challenge—one that could drastically change all their lives and even end Sam’s career—will the mounting pressure deepen or damage their bond? 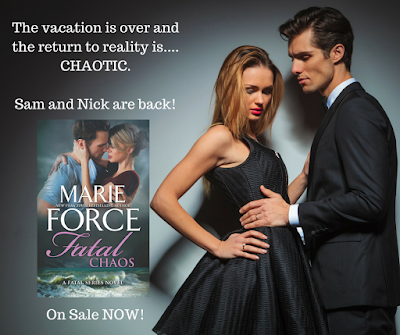 
CHECK OUT THE REST OF THE FATAL SERIES

All together, her books have sold 6.5 million copies worldwide, have been translated into more than a dozen languages and have appeared on the New York Times bestseller list many times. She is also a USA Today and Wall Street Journal bestseller, a Speigel bestseller in Germany, a frequent speaker and publishing workshop presenter as well as a publisher through her Jack’s House Publishing romance imprint. She is a two-time nominee for the Romance Writers of America’s RITA® award for romance fiction.

Her goals in life are simple—to finish raising two happy, healthy, productive young adults, to keep writing books for as long as she possibly can and to never be on a flight that makes the news.