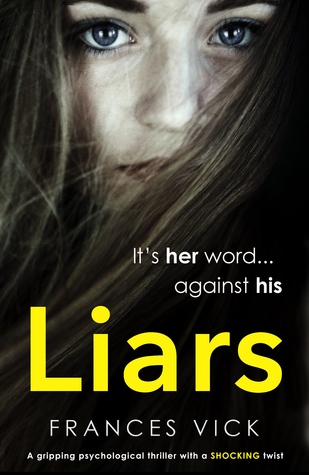 He loves you. He’d do anything for you. But you don’t even know him.

Jenny hasn’t had an easy life – no job and no money, with a sick mother and an abusive ex-stepfather. Not that anybody cares, she’s from the wrong side of town.

David has taken care of Jenny ever since they were at school together. He knows how special she is, how much she needs his support. David has a lot of love to give.

Jenny and David aren’t in a relationship. They aren’t even friends.

Jenny thinks she’s free to do what she wants, see who she likes. What does David think? Well, you’ll have to find out.

A gripping psychological thriller about the lies we tell ourselves, perfect for fans of Friend Request, The Couple Next Door and Teresa Driscoll.

Liars is full of twists and turns and like its name, it seems like everyone is lying. Instead of trying to find the lies, it's easier for the reader to try to piece the truth together.

Jenny had a hard upbringing. She is now taking care of her mother. She has moved back home after her mother suffers a stroke. But, when her mother is found dead while Jenny was out, she feels devastated. She also seems to need an alibi. So this is how David enters the picture.

David seems to be the right guy to fall in love with. He's sweet, handsome, and rich. Yet, we know David is hiding secrets of his own.

Only one person is questioning David's intentions and that would be Freddy. Freddy is Jenny's best friend who has been there for Jenny whenever she needed a shoulder to cry on. He wants the best for her. He supports her blog and her decision to resume her studies. However, the more time Freddy spends with David, the more questions he has about him.

Well, I wanted to like Liars but I can only say that it was too predictable. Furthermore, it felt too long for me and it was in need of major editing. Unfortunately, I didn't like the main characters. Both felt flat for me. I never formed an attachment to them.

I do want to thank Netgalley and Bookouture for the advance digital copy.