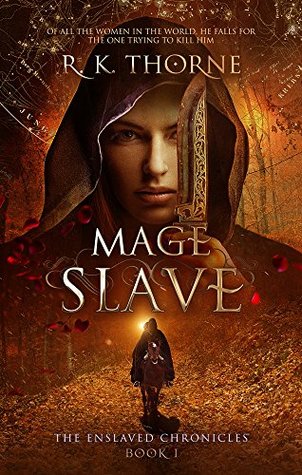 A warrior prince, an enslaved spy, a plot to draw the world to war.

Crown Prince Aven Lanuken wants something more than a trophy for a future wife. He wants a woman who will be more friend than follower. A queen who will be more warrior than diplomat. He wants a partner he can trust… with a dangerous secret that’s kept him trapped in a dark mountain fortress his entire life.

Mage slave Miara wants something more, too—to find an enemy prince. And not to marry him. She’s just received orders for her very first kidnapping. She loathes the idea of it, and it’s probably a suicide mission. But she has never failed a mission before and doesn't intend to start now.

Of all the women in the world, why does he have to fall for the one trying to kill him?

Magic, politics, love, and fate collide in the destinies of two people in this fantasy adventure from R. K. Thorne. For lovers of swords and sorcery with a side of romance, Mage Slave is the first novel in the Enslaved Chronicles trilogy.

I had a taste for fantasy and grabbed this novel because it had a beautiful cover and an intriguing synopsis.

Miara is a Mage Slave. She has creature magic, meaning that she can turn herself or someone else into a creature. Miara can also communicate with animals and humans too. She has been a slave for a while. The Masters of Kavanar have used a type of air magic to enslave mages. They brand them on the shoulder and a spell keeps them in line. Miara despises them but she's not able to challenge them. She's given her next mission and to her surprise, it involves something much more dangerous. They want her to kidnap the prince Aven Lanuken. She knows this could be very dangerous but she has no way of refusing them.

Prince Aven Lanuken lives in a fortress within a mountain. He loves his parents but he feels like he's missing something. He's also trying to hide a secret but he doesn't know how long he can continue doing so. He's at the right age to marry and he's in search of a queen but so far no one has grabbed his attention. When Miara kidnaps him and he can witness her magic, he's in awe of everything she can do with it. He tries to learn as much as he can of the outside world before she delivers him to his enemies.

I had some issues with the story. First, the dreaded insta-love showed its face. Miara and Aven fall in love pretty much from the moment they meet. Then, there was the problem with the slow-paced action. It was like dragging teeth. I was ready for more fighting and more magic. Only the last third moved much faster. Last, Aven is supposed to be a brutal fighter but on more than one occasion, his skills were lacking.

The things I liked: The magic. We had earth, air, and creature magic. It was cool the way Miara could transform someone else besides herself. She could be anything she wanted to be. Aven had a great disposition. Despite being kidnapped, he tried to look for the good in any situation. He was enjoying the forest and you can tell how happy he was to be outside the fortress. He had good values and he truly wanted to help his people and keep them safe. The Masters were so mean. It was easy to hate them and I wanted nothing more than to see them defeated. I was pleased with the ending and I'm looking forward to reading the next two books. I hope there is more action.